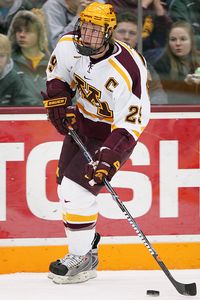 In this second part of the college review, six other prospects are discussed, including Ryan Stoa (pictured), who put together a season in which he was named an All-American.

In his first two seasons at Northern Michigan, Mark Olver led the team in scoring in both years.  Olver is a dynamic offensive player, but still needs to fill out in order to make it to the next level.   He’s a slick passer and while he’s not the most physical player, he won’t shy from contact either.

Northern Michigan saw a bit of success in the 2009 CCHA tournament.  Olver and the Wildcats upset Miami University in three games.  Olver had three points in the series.  Northern Michigan would lose to Notre Dame in the semifinals, but would beat Alaska-Anchorage in a third place game.

Kent Patterson had to know he wouldn’t be receiving many starts in 2008-09 playing behind the talented Alex Kangas.  After all, in the previous season, Kangas posted a sub 2.00 goals against average and a 0.930 save percentage.  However, in his sophomore year (2008-09), Kangas struggled in the second half of the season, but Patterson made only one start this year.  The rest of his playing time consisted of mop up duty.

Patterson’s lone start came on home ice against Minnesota-Duluth.    The game resulted in a 2-2 tie, but Patterson made 34 saves.  When watching Patterson, you can see that he is an athletic goaltender and plays big in net.  One would expect Patterson to start more games for the Gophers next season, especially if Kangas gets off to a slow start.

Billy Sauer had a sparkling junior season in 2007-08.  He had a 30-4-3 record, with a goals against average of 1.95 and a save percentage of 0.924.  After advancing to the Frozen Four in 2008 with wins over Niagara and Clarkson, Sauer and the Wolverines fell apart 5-4 in overtime to fourth seeded Notre Dame.  The year before (2006-07), they were throttled by North Dakota 8-5 in the opening round of the NCAA playoffs.  What do these two games have in common?   They were both at Pepsi Center.

Sauer consulted with a sports psychologist between his sophomore and junior seasons.  Yet, with his second straight blowup in Denver, Wolverines coach, Red Berenson, opened up a competition going into 2008-09 with Bryan Hogan.  Statistically, Sauer and Hogan put up similar numbers (goals against average and save percentage).  The difference was that Sauer received little offensive support.  Hogan played the majority of the games for the Wolverines, including their upset loss to the Air Force Falcons in the 2009 NCAA tournament.

Billy Sauer’s future with the Colorado Avalanche organization is unclear.  Colorado has until August 15, 2009 to sign him to a contract before he becomes a free agent.  Yet, will the Avs sign him?  The goaltenders that played with Colorado and Lake Erie (AHL) this season are all free agents come July 1, 2009.  The Avs have to sign Trevor Cann (London/ OHL) to a contract before June 1, 2009 or they relinquish his rights.  A lot will depend on the scouts and the new Avs general manager.  Sauer may be waiting for a while.

The 2008-09 season proved to be a busy one for Kevin Shattenkirk.  In December, he participated in the 2009 World Junior Championships in Ottawa.  It was another disappointing finish for the Americans, but Shattenkirk had a strong tournament.  He led all American defensemen in scoring with nine points in six games, which was also tied for the overall lead in defensemen scoring for the tournament.

Shattenkirk would only miss two games for the Terriers while at the U20 tournament.  Yet, he led all Boston University defensemen in plus/minus at plus 28.  He asserted himself more physically, especially in the playoffs.  He recorded 28 points in 43 games, third for BU defenders.  Shattenkirk played on the top power play unit with his defensive partner Colby Cohen.  The Terriers were second in the nation on the power play at 21.9 percent.

Kevin Shattenkirk didn’t strike gold in Ottawa, but he would become a champion in Washington DC.  He had defensive blunders in the game.  It was certainly one of his weaker performances defensively.  Yet, in the overtime period of the 2009 Frozen Four championship game, he dropped the puck back to Colby Cohen, who scored the game winner.

As of this posting, there is no official word whether Shattenkirk will return to BU for his junior season or turn pro.

2007-08 was supposed to be the breakout season for Ryan Stoa.  Yet, in the second game of the season against Michigan, Stoa injured his knee.  The injury would keep him out for the rest of the season.  Ryan Stoa opted to take a medical redshirt, retaining his junior eligibility.

Stoa was named captain for the 2008-09 Golden Gophers.  He edged freshman team mate, Jordan Schroeder, in team scoring with 46 points.  His 24 goals were tied for fifth in the nation.   While Stoa had a good year statistically, it was a down year for the Gophers as a team.  They failed to make the NCAA tournament.  It was a missed opportunity as this year’s West Regional was held at their home rink (Mariucci Arena).

Ryan Stoa decided to forgo his senior season and signed a two-year entry level contract with the Colorado Avalanche.  Stoa is expected to compete for a roster spot when the Avs begin training camp in September.

Yip had four points in the 2009 NCAA tournament.  He produced 20 goals and 43 points in 45 games in his final season as a Terrier.  Yip isn’t a wall flower.  His “in your face” mentality drives his opponents crazy, but it’s that same drive that makes him so effective in all facets of the game.  Yip is hoping to garner a contract from the Colorado Avalanche.  However, any negotiations may be on hold until a new Colorado general manager is named.