Back on February 10th, the Avalanche were shut out by Dan LeCosta - a Columbus goalie making his 2nd career start. Last night, the Avs showed that they still have some fight in them, topping that accomplishment by getting shut out by Al Montoya. It was Montoya's first career start.

There's not a lot to say about the game. The Avs played pretty well for a team with 4 defensemen having a combined 17 NHL games under their belt (including last night). Honestly, while there probably aren't any future stars among the recent Monster call-ups roaming the blueline, I was hard-pressed to see just how much of a step down this crop was from the $20 million group of guys we'd be using if the team wasn't sitting guys on purpose so banged up.

Andrew Raycroft had another good night between the pipes, but it's really hard to win when the guys in front of you score as many goals as you and I have scored in our NHL careers - nada. Overall, the team had some good opportunites, but couldn't convert. That's definitely the theme for the season, other than the whole Ti4T meme.

Up front, the Avs had some flashes from the TJs (Galiardi and Hensick). I wonder if the latter is feeling some pressure from the former, because he seems to be playing with a bit more urgency of late. If I had to pick 12 forwards for next year out of the current crop (including the "injured" players, I think I'd go with Galiardi at this point. 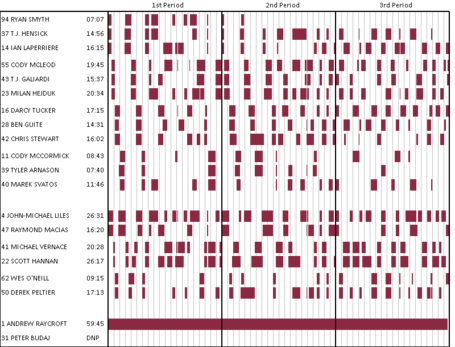 The injuries continue to mount, and these actually look to be legit. Ryan Smyth left the game in the 2nd with a hand injury. Cody McCormick appeared to injure his shoulder in an innocuous-looking blueline collision and didn't return. And John-Michael Liles was wincing on the bench in the 3rd, but he was able to finish the game. It would not shock me in the slightest to hear that at least two of those three were now done for the year.

The Avalanche are in Vancouver on Sunday. I don't know about everyone else, but I'm really enjoying the light schedule this week...

[The Avalanche] will finish below .500 for the first time since 1993-94, when they were the Quebec Nordiques. The Avalanche has been outscored 36-10 during its winless streak, including 22-4 at home. - AP

The only way the Avs can not finish last in the Western Conference is if they win their final five games and the Coyotes lose their final five. - Adrian Dater, Denver Post

The first 8-game losing streak for the franchise since 17 years ago. They must really want Tavares. - Shane Giroux, Avs Talk

Serious or not, what the unnamed Phoenix official said is what a couple of other league-related people have also mused lately - the possibility that the Avs are, in fact, tanking it down the stretch to get the highest possible draft choice this June. - Adrian Dater, All Things Avs