Share All sharing options for: Future Avs on Dislpay? 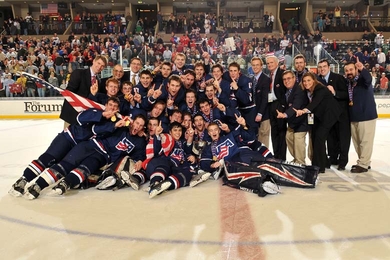 The 2009 IIHF Under-18 tournament just concluded this weekend in Fargo-Moorhead with Team USA (pictured) taking gold.  They beat the Russians 5-0.  It's the 11th year of the tournament and the Americans have won four times, the most of any other country.  I've been a casual observer of this tourney for the last few years, mostly watching players who will be attending the University of Denver in the near future.  Denver had four recruits in this tournament, including Colorado native Drew Shore, who is expected to be taken in the first round of the 2009 NHL Entry Draft.  Since I began blogging about prospects more then two years ago, I've looked at this tournament more through a "NHL scout's eye."  The college hockey side of me is excited for the future of the Denver Pioneers, but I realize it's also a breeding ground for future NHL stars.

The Under 18 tournament, along with the Frozen Four and Memorial Cup are the last chance for prospects to improve their stock for the upcoming draft.  The U18 tournament will feature players that are expected to be taken in the next two upcoming drafts.  It helped to cement Kevin Shattenkirk's status in 2007 as captain of the U18 team that led the Americans to silver.  This year, the rising star of this tournament was Finland's Toni Rajala, who led all scorers with 19 points in six games.  The pint sized Rajala was seen as a top 10 pick in the 2009 NHL Entry Draft not more then a year ago.  Yet, an inauspicious showing at the World Junior Championships, three points in six games, saw his stock fall.  Rajala's performance in the U18s likely vaulted him back into the first round, and it couldn't have happened at a better time for the Finnish star.
This tournament doesn't have near the popularity of the U20 tourney.  For one the Canadian Hockey League playoffs are currently ongoing and many Canadian players are unable to participate.  No doubt had the Brampton Battalion been eliminated from postseason play, you would have seen Matt Duchene playing in the U18s for Canada.  For the Americans, who continue to struggle in the World Junior Championships, the U18s are where they shine.  Many of the players from the American squad come from the US National Development Team Program (USNTDP), which is based in Ann Arbor, MI.  The program selects players from around the United States, who play in international tournaments, against Division 1 NCAA programs and in the North American Hockey League.  Next season the USNTDP will join the United States Hockey League (USHL).  Team USA will play a 60 game schedule within the USHL, as well as maintain its international and college commitments.
For the Avalanche, who no doubt had scouts at this tournament, it's a chance to finalize impressions on certain players for their draft lists.  The player the Avs select third overall is not likely skating in the U18s, but with two second round picks in their pocket, it wouldn't be a surprise to see some of the Avs draft picks come from this tournament.  William Wrenn, the defenseman and captain from Anchorage, AK, is someone the Avs could be scouting.  Known more for being a defensive defenseman, the Denver recruit scored three goals in the U18 tournament, including one in the gold medal game.  Another potential draftee is Ryan Bourque, son of hall of famer Raymond Bourque.  The younger Bourque scored his only goal of the tournament on Sunday, but had six assists in seven games.  He recently announced his decommitment from the University of New Hampshire and will be heading to the QMJHL and the Quebec Remparts for the 2009-10 season.
Colorado loves college hockey players and hasn't been shy on taking players from the USNTDP in recent years.  So if you had an opportunity to watch the U18 tournament and especially Team USA, you would have likely seen a couple of players who could one day don a Colorado Avalanche uniform.  We'll know for sure come June 26-27.