Change at the Top?

Share All sharing options for: Change at the Top? 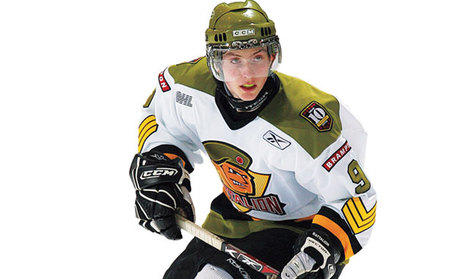 He's the last man standing.  Brampton Battalion's (OHL) Matt Duchene (pictured) recorded a hat trick that helped to propel his team to the Ontario Hockey League Finals against the Windsor Spitfires.  Duchene has been a known commodity to scouts and draft followers, but a recent report from a scouting service has caused casual observers to take notice.

In the April 20th edition of The Red Line Report, Duchene was elevated to the number two ranking.  His rise wasn't a surprise, but it was the fall of John Tavares to third.  Tavares was given a special status that would allow him to play in the OHL as a 14 year old.  He earned Canadian Hockey League (CHL) Rookie of the Year honors in 2006 and in the following season, he was the CHL Most Valuable Player.  This season he passed Peter Lee for most career goals scored in the OHL with 215 (two more then Lee).
In December of 2008, he was named the Best Forward and Most Valuable Player of the World Junior Championships.  In was in that tournament that Tavares was cemented in the minds of many as the projected top pick in 2009 NHL Entry Draft.  While Tavares shined, defenseman Victor Hedman had a somewhat inauspicious tournament for Sweden.  A mid-season trade landed Tavares with the London Knights (OHL).  As the playoffs began, it was the hope that the addition of Tavares, along with other players (including Trevor Cann), would rocket the team all the way to the Memorial Cup.  Unfortunately for London, they would stub their toe against Windsor.
Tavares finished the postseason with 21 points in 14 games.  Yet, he didn't dominate games as some had expected.  Some wondered if a shoulder injury he suffered from was still causing him problems, others questioned his passion and motivation.  He has been at the top of the pedestal for so long that it was natural for others to begin picking apart his game.
While it appeared to be a lock that Tavares and Hedman would go first and second in the draft, Tavares's slump and the emergence of Matt Duchene began to shake things up.  In recent weeks Matt Duchene has moved up into the top five and now is considered as a near lock as the third overall pick for the 2009 draft.  Duchene has a smart two-way game and is a fantastic skater.  He's a play maker, but also carries a nice wrist shot.  He's described as the complete player.  Perhaps not the prolific goal scorer of someone like Tavares, but someone that has the intangibles.  As the second line center for the Brampton Battalion, he has 23 points in 16 playoff games.  Going into the OHL Finals, he is the third highest scorer on his team.
Names like Joe Sakic, Steve Yzerman and Jonathan Toews are being thrown out to describe Duchene.  Perhaps too high of praise, but he is an incredible team mate and is dedicated in all phases of the game.  For John Tavares, his skating has always been a question mark, but there is little questioning of his marksmanship.
Victor Hedman is a 6'6" defenseman that has drawn comparisons to Chris Pronger and Zdeno Chara, but he may play more like Jay Bouwmeester.  He's the franchise defenseman that most teams covet, a perfect defender for the "new" NHL.  Hedman, along with Tavares and Duchene are seen as the consensus top three picks for the upcoming draft.
The teams holding these picks are the New York Islanders, Tampa Bay Lightning and the Colorado Avalanche.  Barring any trades, the Avalanche are in the position to select which ever of the three players remain.  While the seasons for Tavares and Hedman are over, Duchene will be vying for an opportunity to play in the Memorial Cup.  As the last man standing, Duchene can still alter his position in the eyes of scouts and management groups.  Yet, should a "hot" two months topple the accomplishments of Tavares or the raw talent of Hedman?
That's a question the New York Islanders will have to answer.  Do you take the known player in Tavares, a player that fans have some familiarity and will certainly sell tickets.  Would you prefer the smooth defenseman or perhaps the center who appears to be the complete package?  The Islanders certainly have a lot to think about.
New York's decision will effect the choices of Tampa Bay and Colorado.  With Vincent Lecavalier and Steven Stamkos down the middle, Tampa Bay may opt for Hedman.  The Avalanche have needs everywhere and would be happy with any of the three.  However, they will scout other top players, such as Vancouver Giants (WHL) forward Evander Kane.  Still, with the potential retirement of Joe Sakic and a known childhood attachment to the team, Duchene feels like the perfect fit for Colorado.
A duo of Matt Duchene and Paul Stastny at center for the Avalanche would evoke memories of recent glory days and imagining of what the future may hold.