Joined Team: Tony Granato has been with the Colorado Avalanche as either a coach or an assistant coach since the 2002-2003 season. He was named head coach (again) last May. 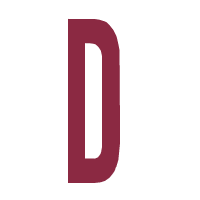 Disclaimer: Of all the grades I'm going to do this year, evaluating a coach is the one that I am least qualified to do. I'm no hockey genius to begin with, but I can at least see what the players are doing on the ice. For the sake of completeness, I'm going to give it that old college-dropout try just the same.

Also, Granato does not coach alone. Dave Barr and Jacques Cloutier both stand on the bench during games, for example. Since there's no way to adequately separate coaching responsibilities - and since ultimately Granato is the one responsible for his staff - this grade essentially refers to Granato and his staff.

Simply put...a mammoth failure. The Avalanche were supposed to be an uptempo team. Instead, they were the same dump, chase and cycle bores from the previous season, except not as effective. The Avalanche scored just 190 goals, the 2nd lowest post-lockout effort in the league. 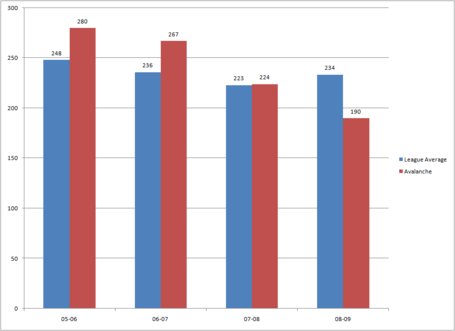 As you can see, the Avs were well below the league average in scoring. Even last year's anemic offense managed to at least hit the average mark, albeit by a moustache whisker. The Avs rarely had two lines putting pressure on the opposing clubs, and almost never had three. Hell, some nights we didn't have one scoring line, as the club was shut out 12 miserable times.

For whatever reason, the Avs' defensemen rarely joined the rush. John-Michael Liles led the team with 18 even strength points. 43 defensemen (including Keith Ballard, Jeff Finger and Rob Blake) had more EV points.

Believe it or not, I don't have as much issue with the defense as others do. I certainly expected a lot more out of this venerable....er, veteran crew, but I thought the defense generally played acceptable. Yes, we can all point to miscues and bad plays, but, on the whole, I think the squad did a good job - not a great job, but a good one. Okay, maybe good is too strong a word. Passable?

As a team, the Avalanche were second in the league in blocked shots. I know there is an argument that that is a detriment to the goaltending at times, but you still have to appreciate that Granato's guys were willing to sacrifice their body so often.

For the first part of the season, Granato gets high marks for sticking with Peter Budaj. Out of Budaj's first 12 losses, Granato went right back to him for the next start 10 times. That was extremely refreshing after the ridiculous Quenneville carousel we've experienced in recent years.

Sadly, Granato soon began to use the same tactics as the previous regime. Over Budaj's final 17 losses, he was replaced for the next start 12 times. The confidence lost in his young goaltender was visible on the ice far too often during the second half of the season.

The Avalanche were in the bottom 3rd of the league on both the power play and penalty kill. Although the Avs' 15.7% effeciency represented an improvement over the previous season, the increase was about on par with the increase in PP conversion throughout the league (an increase I can't explain) 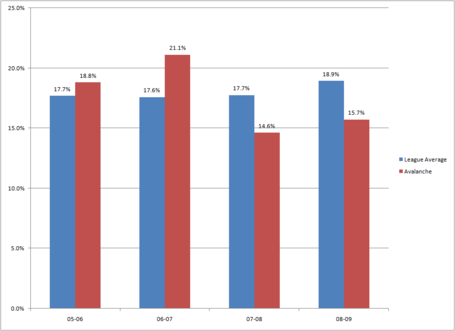 You can't really blame injuries here, as only Joe Sakic and Paul Stastny missed substantial time. The core squad of Milan Hejduk, John-Michael Liles, Ryan Smyth and Wojtek Wolski is a capable group (in theory). The Avalanche managed just 3 goals all season at 5 on 3 (amazingly 3 teams had less than that), so you have to know there's bigger issues here than personnel.

As a player, Granato was a physical player - he has more than 1400 penalty minutes in his career. While we were promised a more uptempo game than we'd seen in the Quenneville era, the roster featured a lot of Granato-esque players, so it wouldn't have been unexpected to see an increase in physical play. Here's a look at the Avs' hit totals over the last few seasons (admitedly, hit totals aren't a perfect number, but it's about all we've got). 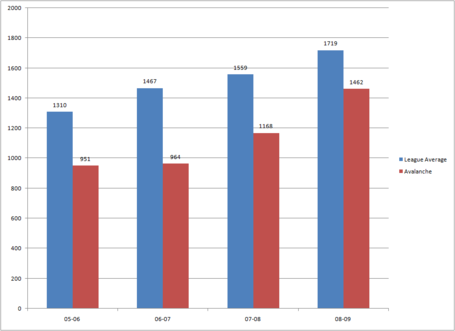 The Avs have been well below the league average every year since the lockout. Granato's club last year was actually the closest the Avs have been to the the middle of the pack since the lockout (15% below the league average), but it's still rather anemic. Had the Avalanche actually played an uptempo game, the lack of hitting wouldn't be an issue. But they didn't, and it is.,

In another separation between Granato the coach and Granato the former player, the Avalanche were one of the more disciplined teams in the league, as only 5 teams had few penalty minutes.

This is an area where I felt Granato represented a substantial upgrade over Quenneville. Granato did not play mind games with his young players and gave everyone multiple chances with good ice time (not everyone took advantage of those chances, but at least they were there for the taking). The move of Wojtek Wolski to center (and first line center at that) is one that Q would never have made. In general, I felt the lines Granato used were logical. He wasn't afraid to change things up, and didn't spend too much time with experiments that weren't working (Cody McLeod and Tyler Arnason on top lines, for example).

My one criticism was the reluctance to bench Arnason until late in the year and his reliance on Darcy Tucker in critical late-game situations.

For whatever reason, Granato 2.0 didn't work for the Avs. The Avalanche lacked any sort of discernable game plan; actually, I wouldn't have minded seeing the Avalanche lose if they were following some sort of master plan that just wasn't quite working. Instead, the Avs were more flailing than failing. I thought it would be tough for the Avs to have even less of an identity than they did under Joel Quenneville, but somehow Granato found a way to do that. It wasn't hard-hitting. It wasn't defensive-minded. It wasn't intimidating, or skilled, or even neutral-zone trappy. It certainly wasn't uptempo. It was just...vanilla. I hate vanilla.

Whatever you think of the job Granato did, you have to be shocked that he wasn't let go. A lot of coaches have been fired after much better seasons than Granato had. I am not a fan of change for the sake of change, but if there ever was a time you were going to change your coach to shake things up, this was the time. While the new GM - whoever that is - can still choose to make the move, the opportunity to send a clear message to the fans and the returning players has already passed. Simply put, the delay in making a decision on Granato is a colossal fuck up by the front office and shows that this franchise is still not capable of competing in the new NHL.

I really liked the way Granato handled himself publicly this year. He never pointed fingers or passed the buck - he was honest about the way he and his players performed and that candor is refreshing coming from a coach (and this organization in general). He could have sulked when his team was letting him down, but he never did that.

It is with complete sincerity that I say I believe Tony Granato may one day be a very sucessful coach in the NHL. This just is not the situation where that's going to happen. The circumstances of his demotion / promotion coupled with the lack of a proper candidate search last summer followed by the season from hell is just too much for a coach to overcome. Frankly, Granato needs a fresh start as much as his team does.