Yesterday, I wisely postulated that the Canucks would bring their "A" game because of the whole "fighting for the division title" thing. And now you know why I work for a living instead of, say, making all my money on the stock market.

I fell asleep during the 2nd intermission, but it looks like the 3rd period was a lot like the first two - a solid effort from the Avalanche and a head-scratching lack of intensity from the Canucks. TJ Galiardi continues to be one of the true bright lights in the darkness of this late-season abyss, and seems to be improving in every game. Last night he centered the "top" line (quotes required) with Milan Hejduk and Darcy Tucker riding on the wings. Galiardi had two goals (he's now 1 behind TJ "L'Autre" Hensick), Hejduk had a goal and 2 assists and Tucker even pitched in with 2 assists. In typical Avalanche fashion, the other 3 lines contributed just one goal.

Peter Budaj looked excellent betweent the pipes. Other than those two complete stinkers from the entire team, Budaj has consistently been one of the Avs best players over the last few weeks. That's certainly not saying much, but it is worth throwing out there. 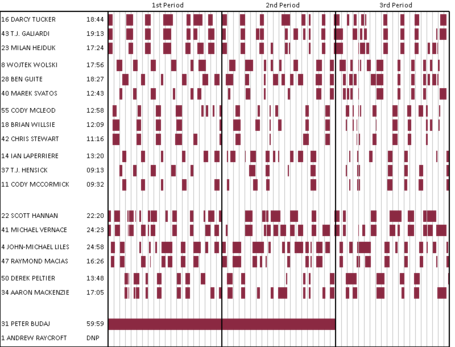 Wojtek Wolski returned from what they are now calling the flu. Okay. Wolski played on the wing, starting with Hensick and Svatos but finishing with Guite and Svatos.

And, of course, Aaron MacKenzie became the 10th Avalanche to make his NHL debut. He looked way better than Wes O'Neill.

The Avs' last home game of the year - Tuesday in San Jose. If Detroit loses on Monday, San Jose would officially lock up the #1 seed with a win against the Avs.

Coming off a 5-3 loss in Edmonton on Saturday night and playing at home for just the second time in the last nine games, the Canucks couldn't take advantage of an injury-riddled Avalanche team that sits in last place in the Western Conference. - AP

The Canucks took another step backwards tonight in their overall team play and showed a general lacking in their ambition and intensity levels. Was it a fatigue factor? An emotional struggle given the situation with Taylor Pyatt? Complacency because of a clinched playoff berth?  Or was it all of the above? - Zanstorm, Nucks Misconduct

In a matchup that looked so lopsided on paper — the sad-sack Colorado Avalanche had lost eight straight games, were missing 10 injured regulars and iced four rookie defenceman who had combined for just 14 NHL appearances — the Canucks once again left their faithful in head-scratching mode after a disheartening 4-1 loss to the league’s second-worst team. - Ben Kuzma, The Province

“There’s no excuses tonight,” said Vancouver goalie Roberto Luongo. “That was a game we needed to have. We all need to give a little bit more, starting with myself trying to make one or two more saves.” - Brad Ziemer, Vancouver Sun

The developments — including Galiardi's strong play since his recall from Lake Erie on March 19 — don't mean that the deployment of Wolski at center, his major junior position, is over, whether in the waning days of this horrendous season or beyond. - Terry Frei, Denver Post

Avalanche captain Joe Sakic, who last played on Nov. 28 and is recovering from back surgery, again was out with his teammates at the morning skate Sunday. Afterward, the Vancouver native said he is making gradual progress in his attempt to get back in game condition and still was targeting a return at some point in the upcoming season-ending, three-game homestand. - Terry Frei, Denver Post