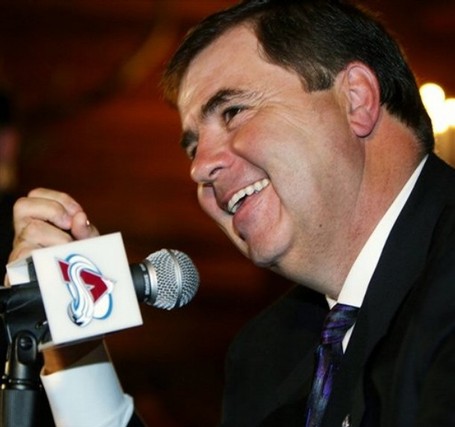 With the season all but over (and the draft lottey just one week from today) our attentions are naturally shifting from the steaming pile of poo dumped onto the ice a few nights a week to the folks who are responsible for said poo. This upcoming offseason is a critical one for the Colorado Avalanche and probably the biggest since the summer the new CBA was implemented (aka the disaster that started this whole mess). The Avalanche certainly need to make changes to the front office this summer. But, that doesn't go far enough. More importantly, the Avalanche need to make the right changes to the front office this summer.

The latest rumors have team president Pierre Lacroix stepping back into his old GM shoes and bringing his former client, Patrick Roy, in to coach the team. Adrian Dater doesn't specifically address the Roy part, but thinks it's about a 50/50 proposition on the former. Woodhead Paige wants both to happen (which should be enough to tell you it's a stupid idea). I think it's a bit premature to start picking our next coach, but I have no problem voicing my opinion on the idea to bring Lacroix back as GM: Thanks, but no thanks.

I probably should preface this all by saying that I'm not all that certain that Francois Giguere needs to go. I don't make the decisions, though, and I do have a feeling that both G-man (Giguere and Granato) will be gone before someone raises the Stanley Cup this summer. I also think that Lacroix will be the next GM of the Avalanche. In my opinion, it's the wrong move.

Lacroix is rightfully recognized as the GM behind the Avs' two Stanley Cups. He made bold moves - Roy, Bourque, Blake, Lemieux - to turn a talented team into a championship team. However, Lacroix did not build those teams - he just put the finishing touches on them.

When Lacroix took over from Pierre Page in May of 1994, he inherited a talent-laden team that had underperfomed the year before. The Nordiques were on the rise after a slew of terrible seasons...and high draft picks. From 1987-1993, Quebec had 8 top 10 picks (3 of those were 1st overall). Now, Lacroix did take that team and turn it into a champion, and I don't want to denegrate the job he did at all. Still, if you look at the 1995 Cup team, a lot of the key players - Sakic, Forsberg, Ricci, Simon, Kamensky, Corbet, Young, Gusarov, Klemm, Foote, Wolanin, Leschyshen - were already in place. When Lacroix came on, he made moves for Lemieux, Lefevbre, Ozolinsh, Yelle and, of course, Roy (and Mike Keane) that gave the franchise the necessary push to get over the hump. Later, he would tweak the roster further, bringing in guys like Bourque and Blake to get a second Cup.

I still contend the Colorado Avalanche are a good team in need of a good coach and some roster fine-tuning. Pierre Lacroix does not fine-tune. He makes wholesale changes. He trades Mats Sundin for Wendel Clark. He trades for Patrick Roy. He moves Owen Nolan for Ozolinsh, Dury for Morris, Morris for Gratton. He trades for Theodore. He doesn't do small. Lacroix's aggressive tactics worked (mostly) because he had a deep talent base to work from and a large payroll budget. He'll have neither if he signs on for round two. In today's NHL, splashy isn't going to cut it and PL just hasn't shown he's capable of the gentler hand that modern GMs need. In fact, it's the other way around. This franchise is still trying to recover from Lacroix's post-lockout flubs - losing Forsberg, losing Foote, the lost cap room due to the Sakic and Blake bonuses, getting swindled to take Theodore's massive contract. And, they would certainly be in better shape today had Lacroix not made the ill-advised, desperate play to move Derek Morris and Keith Ballard for Ossi Vaananen and Chris Gratton.

These days, the draft has become an increasingly important component in the way that teams build their teams. Lacroix is known for some excellent late-round picks (Svatos in the 7th, Liles in the 5th, Pahlsson 7th). Unfortunately, his first round picks have been...well, terrible. Here's the first round picks under his tenure: Denis, Ratchuk, Grimes, Tanguay, Skoula, Regehr, Parker, Kuleshov, Nedorost, Johansson and Wolski. That's a lot of misses and only a couple of hits (and 4 of those guys came from one draft).

There's another reason that I'm against Lacroix, Part Deux. I'll let Dater put it in his words:

Lacroix has not and, according to Avs VP of media relations Jean Martineau, will not speak with the media in the near future. There is nobody more secretive and tight-lipped with the media than Pierre Lacroix.

Um, yeah. Memo to the Avalanche: we're trying to bring teams into the 21st century. We need less of this childish loose-lips-sink-sinks approach, not more. Obviously, Lacroix is not a changed man. The Avalanche already lag behind just about every NHL team in the communication department and Lacroix would be a big step in the wrong direction.

So, thanks, but no thanks. If Giguere does go, I'd prefer to go in a completely new direction. This franchise had a great run under Pierre Lacroix, but it's time for a new approach. Personally, I'd like to see the team get really radical and go outside of the organization entirely (crazy, I know). Everything about the franchise seems stale and tired right now and that's reflected in the team's dismal attendance numbers.  Installing another inside man - be it Lacroix or someone else from within the organization - is going to extend the message to the fans that the team is perfectly happy with the status quo. I can assure you: the fans are not.