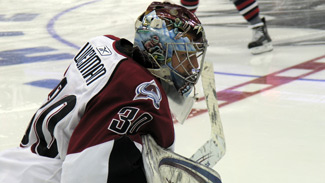 After an inaugural season that saw the Lake Erie Monsters finish with a record of 26-41-6-7 and a sixth place finish in the North Division, a playoff position was set as a goal for the 2008-09 season.  Unfortunately, the Monsters fell short of their goal.  They were eliminated after game 76 of the regular season.  Whether it was due to the numerous call ups by the Colorado Avalanche and injuries of their own, it was an up and down season for Lake Erie.
The Monsters finished with a 34-38-3-5 record in 2008-09, 11 more points then in 2007-08.  It was an improvement, but they still could only manage a sixth place finish in the North Division.  Despite the injuries and the 15 players recalled to Colorado, one thing remained consistent, the goaltending.  Only two men would man the crease this season for the Lake Erie Monsters, Tyler Weiman (pictured) and Jason Bacashihua.
Tyler Weiman was selected by the Avalanche in the fifth round of the 2002 NHL Entry Draft.  Weiman spent four seasons with the Tri City Americans (WHL).  In his first professional season, he helped lead the Colorado Eagles to their first Central Hockey League championship in 2004-05.  He spent the next two years mired in places like San Diego (ECHL), Lowell (AHL), and Albany (AHL).  Heading into his fifth year as a professional, Weiman had only seen one game of NHL action and that was in mop up duty.
Tyler Weiman finished the 2008-09 season with a 21-20-2 record, 2.46 goals against average and a save percentage of 0.915.  Weiman's eight shutouts led the league.  He was one of two Lake Erie Monsters to participate in the AHL All Star Game (Kyle Cumiskey was the other).
Jason Bacashihua was acquired from the St. Louis Blues for a conditional seventh round pick in 2007.  The man called "Cash" finished with a 5-11-2 record in 2007-08.  He was somewhat of a hard luck loser this season finishing with a 13-21-3 record, 2.77 goals against average, and a save percentage of 0.905.  Bacashihua did win eight consecutive starts from February 16th to March 8th.  He earned AHL Player of the Week honors during that stretch.
Both Weiman (RFA) and Bacashihua (RFA) will become free agents on July 1st.  It's unclear what their future will be with the organization.  The Avalanche decided late in the season to keep the goaltenders in Lake Erie for their playoff run.  Yet by that time, the Monsters had been all but mathematically eliminated from playoff contention.  Making offseason decisions for the goaltending position will be interesting for Colorado as both Peter Budaj (RFA) and Andrew Raycroft (UFA) are free agents.  The Avalanche also have to make decisions regarding London's (OHL) Trevor Cann and Michigan's (CCHA) Billy Sauer by June 1st and August 15th respectively.