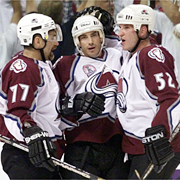 May 26, 2001 - The Avalanche open up the Stanley Cup Finals with a 5-0 drubbing of the New Jersey Devils. Joe Sakic has two goals and an assist and Patrick Roy turns aside all 25 shots to notch his 9th consecutive win in the Finals (one short of the record held by Ken Dryden). One thing I don't remember about the game is Rob Blake getting held off the ice as the game degenerated late:

Defenseman Rob Blake, acquired by Colorado in February as the possible missing piece to a championship, contributed a goal and two assists. When the game got chippy late, Hartley kept Blake on the bench for the last eight minutes