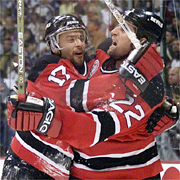 May 29, 2001 - In Game 2 of the Stanley Cup Finals, the New Jersey Devils strike back to defeat the Colorado Avalanche 2-1. Bob Corkum is in the lineup because of an injury to Randy McKay, and scores a goal.

As he was skating in on Patrick Roy in goal, [Corkum] remembered that Roy likes to show a vulnerable "five hole" and then close it at the last second. "That's why I shot quickly," said Corkum, who drilled the puck between Roy's legs.

He added: "This is the most fun I've ever had."