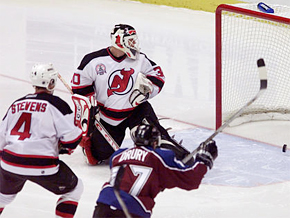 May 31, 2001 - Game 3. Jason Arnott scores first to give the Devils a 1-0 lead. Martin Skoula ties it, Ray Bourque scores the game winner and Dan Hinote ices it with the goal pictured above. Colorado wins 3-1 to take a 2-1lead in the series. Besides the win, the game featured some critical foreshadowing:

The scariest moment for the Avalanche was created by their own goaltender Patrick Roy when he strayed from his net with seconds left in the second period. He didn't win the race for the puck with Patrik Elias, and he was forced to block Elias' shot while he was well out of his net. It still hit the post.

"I wasn't pleased with myself," said Roy, who called it a bad decision to go roaming.