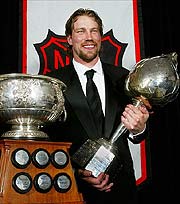 June 12, 2003 - Bonus coverage today for TICAH. As his linemate Milan Hejduk was collecting the Rocket Richard Trophy, Peter Forsberg received his Art Ross Trophy for leading the league in points (106) and also won the Hart Trophy as the league's MVP. However, Forsberg was already making Avalanche fans nervous by revealing that he was considering playing in Sweden in the upcoming season. In the end, Forsberg decided to stay put, and two weeks later signed a 1-year deal with Colorado. Perhaps he regrets not going across the pond; Forsberg missed 43 games because of hip and groin injuries.