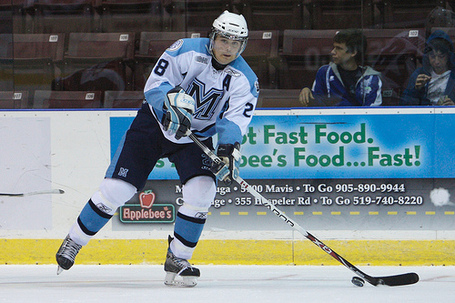 The Avalanche had eight prospects that played junior hockey in the United States and Canada this season, including 2008 second round draft pick, Cameron Gaunce (pictured).

Trevor Cann began the 2008-09 season with the Peterborough Petes.  An early season trade would take him to London, where he posted a record of 30-10-0-1, and 2.51 goals against average (fourth lowest in the league) with the Knights.  London would swing a trade later in the season for projected first overall pick John Tavares.  London hoped its haul would take them to the Memorial  Cup.  Unfortunately, Cann and the Knights would lose to the eventual Ontario Hockey League (OHL) and Memorial Cup champion Windsor Spitfires in the Western Conference Finals.

Cann suffered a concussion in the later portion of the regular season and upon his return, his play became more inconsistent.  In the conference finals against Windsor, Cann was said to be ill during the series.  Cann’s unpredictable play drew ire from some London fans, but it didn’t deter the Avalanche from signing him to an entry level contract.  Cann does have a year of eligibility remaining with the London Knights, but it’s likely he’ll begin his professional career with the Lake Erie Monsters next season.

The 2008 NHL Entry Draft was teeming with strong defensive prospects.  The Avs were certain to get in on the party with the selection of Mississauga’s Cameron Gaunce with the 50th overall pick.  Gaunce wasn’t a sexy pick, in fact he was projected to be taken in the third or fourth round.  He doesn’t have blazing speed, but was a solid offensive contributor.  Fortunately for the Avalanche, Gaunce blossomed.

His skating improved and he jumped from 40 points in 2007-08 to 64 in 2008-09 (5th highest for OHL defensemen).  Gaunce’s performance earned him OHL All-Star Second Team honors and he was third in OHL Defenseman of the Year voting.  In addition, coaches claimed him to be the best defensive defenseman and second best offensive defenseman in the Eastern Conference.

Gaunce and the Majors would lose to the Brampton Battalion in the second round of the OHL playoffs.  He had a solid playoff campaign with 10 points in 11 games.  Gaunce signed a three-year entry level contract with the Colorado Avalanche.  Due to his age, he would be unable to start the 2009-10 season with the Lake Erie Monsters.  Expect Gaunce to spend another season in Mississauga as he continues to refine his game.

Kevin Montgomery signed an entry level contract with the Avs in the summer of 2008.  He attended training camp with both the Avalanche and the Monsters.  After a brief stint in Lake Erie, he was sent back to the London Knights.  With Lake Erie, the Rochester, NY native played in just five games and recorded an assist.  Montgomery has a strong offensive prowess, but is prone to questionable decision making and isn’t the most physical of defenders.  These problems continued to follow him this year with the Knights.

Montgomery did have a solid offensive season for the Knights, recording 36 points in 46 regular season games.  He contributed with four assists in 14 playoff games, as London was eliminated in the Western Conference Finals against the Windsor Spitfires.  The 2006 fourth round selection will need to continue to work on his defensive positioning as he moves on to the AHL next season.

Joel Chouinard was an obscure sixth round pick in 2008; little was expected of the Sherbrooke, QC native.  Chouinard had a solid training camp before being returned to the Victoriaville Tigres.  His defensive positioning was more polished then Cameron Gaunce during training camp.  Still, it was his offense that drew Colorado’s attention.

While Chouinard’s offensive numbers came along slowly, his defensive game improved.  He recorded 12 goals and 35 points in 64 games this season, the same tally as last year.  Unfortunately for Chouinard, he and his Victoriaville Tigres teammates were swept out of the first round of the playoffs by Shawinigan.  He had a lone assist in the series.  Chouinard is expected to return to Victoriaville for the 2009-10 season.

Peter Delmas was waiting for his name to be called by the Colorado Avalanche at the June draft in 2008.  He knew the Avs wanted him, but Colorado went with the defenseman Gaunce with the 50th overall selection.  However, Colorado swung a deal, shipping restricted free agent Brad Richardson, to the Los Angeles Kings for the 61st pick.  A relieved Delmas finally heard his name.

The draft could be viewed as the high point for Delmas.  After completing training camp with Colorado, he returned to his junior team in Lewiston, ME.  The season was a disaster for both Delmas and the MAINEiacs.  Lewiston finished with the third worst record in the league during the regular season and Delmas won just nine games.  He finished with a goals against average of 4.11 and save percentage of 0.867.  Lewiston was throttled by Drummondville in the opening round of the Quebec Major Junior Hockey League (QMJHL) playoffs; outscored 38-9 in a four game sweep.

While the MAINEiacs will remain in Lewiston next season, Delmas will not.  Due to a QMJHL draft day trade, the goaltender will be suiting up for Patrick Roy and the Quebec Remparts for the 2009-10 season.

Cedric Lalonde-McNicoll was acquired by the Avalanche via free agency.  The undrafted forward caught the attention of many NHL clubs and received an invite to the Pittsburgh Penguins training camp in 2008.  McNicoll returned to Shawinigan and was hoping a big season would garner him a NHL deal.  He finished third in the QMJHL in scoring with 104 points in 65 games.  Why the forward chose to sign with the Avalanche is unknown.  Perhaps former Av, Eric Messier, who is an assistant coach with the Cataractes, played a role in McNicoll’s decision to sign with Colorado.

The center put up 33 points in 21 playoff games for Shawinigan (fifth highest in the postseason).  The Cataractes would lose to Drummondville in the finals in seven games.  Yet, he racked up some awards along with the points.  He was named the QMJHL Frank J Selke Trophy award winner for Most Gentlemanly Player.  In addition, he earned QMJHL First All-Star Team honors and was named CHL Sportsman of the Year.

Cedric Lalonde-McNicoll is skilled and is a hard worker, and should contribute on the AHL level.  He’s a dangerous player with the puck and his faceoff skills are above average.  If he can adjust to a rougher league, the Avs may have found themselves a diamond in the rough.

After leading the Quebec Remparts in scoring in 2007-08, with 81 points in 68 games, Kelsey Tessier’s production dropped by 25 percent this season.  The 2008 fourth round pick showed great signs in his first NHL training camp last September.  He has a real nose for the net and frustrated Nigel Williams to no end.  Yet his success did not continue this season with the Remparts.

Quebec head coach Patrick Roy attempted to jump start the shifty forward by moving throughout the lineup.  In the postseason, he registered 11 points in 17 games.  The Remparts fell to Shawinigan in the semi-finals in five games.   Bolstered by the addition of Peter Delmas, Tessier and the Quebec Remparts have hopes of making a run to the Memorial Cup in 2010,

The Avs used their final pick in the 2008 draft on Wisconsin high school product Nathan Condon.  Condon, who is committed to the University of Minnesota, spent this season with the new expansion team Fargo Force of the United States Hockey League (USHL).  He recorded 29 points in 58 games, modest numbers for the former high school star.  Condon, known more for his passing game, was projected as a 3rd or 4th round pick, but fell to the 7th round for unknown reasons.

Condon and his teammates made it all the way to the Clark Cup Finals before succumbing to Indiana in four games.  Condon finished with six points in 10 postseason games.  He will make the jump to the college ranks this fall as he will join a Minnesota Gophers squad that features two Avalanche draft picks in Mike Carman and Kent Patterson.