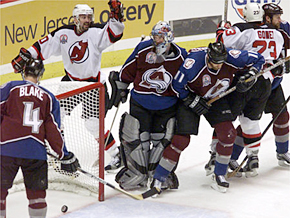 June 2, 2001 - Game 4. The New Jersey Devils capitalize when Patrick Roy mishandles the puck, winning the game 3-2 and knotting the series up at two.

Colorado Avalanche goaltender Patrick Roy's mishandling of a puck behind the net eight minutes into the third period opened the door for the Devils to post a come-from-behind 3-2 win against the Avalanche to tie the series 2-2 heading into Monday's Game 5 in Denver.

When Roy didn't gain control of the puck, Jay Pandolfo pushed the puck in front and Devils center Scott Gomez whacked the puck into an open net. Spirits bolstered by the surprising turn of events, the Devils notched the winning goal when Petr Sykora scored from the slot with 2:37 remaining in regulation.

At the time, I thought that play would be the worst miscue of Roy's playoff career. Sadly, that would be eclipsed less than a year later with the previously featured Statue of Liberty gaffe.