Share All sharing options for: Top Avs Of All Time: #5 Milan Hejduk 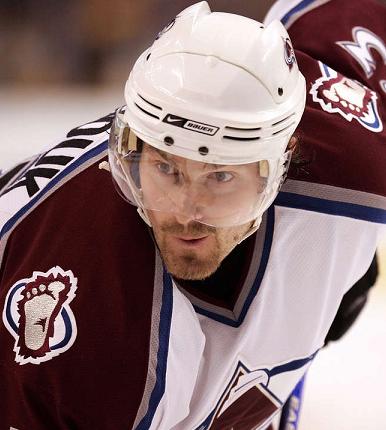 In these days of salary caps and early-career free agency, it's rare for a talented player to stay with the same team for his entire career (or even the majority of his career).  In today's NHL, it seems like the second a good player gets the chance to bolt to a perceptively better team, he's gone.  Apart from that crowd skates Milan Hejduk, the reserved Avalanche right winger from Usti nad Labem, Czech Republic.

Though his offensive output has declined in recent seasons due to a combination of age, injuries, and the dilution of his team's talent pool, "The Duke" remains a cornerstone of the top Avalanche line, always in good position to strike with his quick wrist shot or his sneaky backhand.  His long track record of success, his quiet leadership and his brilliant Richard Trophy-winning season in 2002-03 land him among the very best in the list of Top 19 Avalanche Players of All Time.

Milan Hejduk began his junior career at home for HC Moeller Pardubice of the Czech Extraliga.  He won Rookie of the Year honors in 1993-94 (at the age of 18) with six goals and nine points in 22 games.  Those relatively low numbers may explain why Hejduk wasn't drafted until the fourth round by the then-Quebec Nordiques, taken 87th overall in the 1994 Entry Draft.  Hejduk would end up being a bit of a late-bloomer.  He'd spend another four seasons with HC Moeller Pardubice before landing a spot on the Colorado Avalanche in 1998-99.

Hejduk is currently the second-highest goal-scoring player from his draft class, behind only Daniel Alfredsson (Round 6, 133rd) and sits fourth overall in points (Alfredsson, Patrick Elias and Ryan Smyth ahead of him).

Milan would play all 82 games of his rookie season, but his output was relatively modest.  With 14 goals and 34 assists (15:45 ATOI), Hejduk finished four points ahead of fellow rookie Chris Drury, but Drury would go on to win the Calder Trophy.

In 1999-2000, with injuries shortening the seasons of both the top Avalanche centers (Joe Sakic and Peter Forsberg), Hejduk made himself right at home on the right side of the top line, increasing his points total to 72, leading the team with 36 goals.  No sophomore slump for the still-young Czech standout.  He would frequently be teamed with rookie left winger Alex Tanguay, who did very well for himself that year, as well (34 assists, 51 points).

The real majesty of The Duke would reveal itself the next season.  During the magical 2000-01 campaign, Hejduk frequently occasionally found himself on a line with a healthy Peter Forsberg and Tanguay again, a line later known by some as the AMP Line.  These early days of this line would foreshadow the amazing feats they'd accomplish two season later.  Forsberg would score 89 points, Tanguay would score 77, and Hejduk would finish the regular season with 41 goals and 38 assists, his best points total so far.  His quick hands and impressive skating speed made him a perfect finisher for Forsberg's perfect, supernatural passes.  The two players were rarely apart on the ice.

Despite a ho-hum showing during the previous season's playoffs, Hejduk found another level of excellence during the Cup run of the 2001 postseason.  With the loss of Forsberg to a ruptured spleen after just 11 games, Hejduk transitioned very well to a line with Joe Sakic (as if that's really all that difficult).  The line of Tanguay-Sakic-Hejduk proved especially punishing to the opposition, combining for goal after goal and big shift after big shift.  After winning the Cup, Hejduk finished second on the team in post-season scoring with 23 points in 23 games.  Only Sakic did better, with Tanguay in third.

The following season would be disappointing for Hejduk just as it was for the rest of his team.  He played only 62 games, scored only 21 goals and finished with 44 points, the lowest total of his career to date.  The Duke would score just six points in 16 playoff games and the Avalanche were eventually eliminated embarrassingly by the Red Wings in the Western Conference Finals.

But Hejduk made a drastic rebound in 2002-03 with the AMP Line back in full force.  With Sakic out for extended injury time, the combination of Tanguay-Forsberg-Hejduk as the top line combination would prove fruitful for the Avs.  In 82 games, Hejduk would score 50 goals and 48 assists, winning the Rocket Richard Trophy as the NHL's highest goal-scorer ahead of Markus Naslund (remember when he could score goals?).  Forsberg would lead the league with 106 points (deep in the pre-Lockout Trap period) and win the Hart Trophy.  Unfortunately the playoffs would be frustrating again for the Avs.

Hejduk would have another solid season in 2003-04, scoring 35 goals and 75 points.  In 2004-05, during the Lockout, Hejduk returned to his home team of HC Moeller Pardubice, leading them to an Extraliga championship with 25 goals and 51 points in 48 games.

Since the Lockout, Hejduk has remained productive on the top Avalanche line, despite facing a nagging knee injury, the aging and injuries faced by Joe Sakic, and the general decline of the talent pool around him.  He continues to score 25-35 goals a season and stays out of the penalty box with his disciplined "European" style of play.  In 2008-09, the worst season in Colorado Avalanche history, he co-led the team in points (with draft classmate Ryan Smyth) with 59.

Hopefully The Duke will be able to play a few more seasons and finish his career with the team on which he began it a decade ago.  He's been a rock on the right wing for the Avalanche and his place among the team's best players ever is secure.