Share All sharing options for: Top Avs Of All Time: #4 Adam Foote 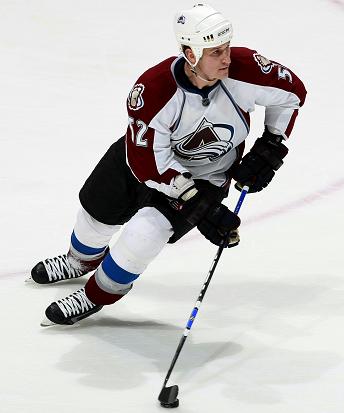 There are several names people instantly think of when they hear "Colorado Avalanche."  Joe Sakic.  Patrick Roy.  Peter Forsberg.  Three of the greatest players ever to play in the NHL, no doubt about it.  But there's one more name that is so connected to the Avalanche that it never gets left out, even if he never had the skill or wrist shot of Super Joe, the craziness or stellar stats of St. Patrick, or the finesse or mind-boggling talent of Foppa: Adam Foote.

Despite a brief stint as the captain of the Columbus Blue Jackets, Adam Foote is and will always be the cornerstone of the Avalanche defense, the hardcase tasked with shutting down the top line of the opposition, whoever they might be on any given night.  And while his age and his injuries may be catching up to him, any game with Footer patrolling the Avalanche blue line is a good game.  For that reason and many others, Adam Foote takes fourth place on the hallowed list of Top 19 Avalanche Players of All Time.

Adam Foote was the first player chosen in the second round of the 1989 NHL Entry Draft, taken 22nd overall by the Quebec Nordiques.  The Nordiques chose Mats Sundin as the top overall pick earlier that day.  Foote had enjoyed a successful junior career with the Sault Ste. Marie Greyhounds of the OHL, steadily increasing his ice time and point totals over three seasons between 1989 and 1991.  At the start of the 1991-92 season, Foote played six games for the Halifax Citadels of the AHL before being called up by the Nordiques.

Foote had his work cut out for him in Quebec, however, because the 1991-92 Nordiques were awful.  Even with Joe Sakic, Mats Sundin and Owen Nolan up front putting up decent numbers, the blueline and goaltending were atrocious.  The only decent defenseman on that team was Curtis Leschyshyn, and he finished -28 for the year.  And while Joel Quenneville's infamous two-goalie carousel was annoying in more recent times, in Quebec that season the goalie duties were shared evenly by three guys: Stephane Fiset, Ron Tugnutt and Jacques Cloutier.  Foote would play 46 games and amass 44 penalty minutes, finishing -4.

The 1992-93 season was considerably better for both the Nordiques and for Foote.  Footer would play the closest he's ever come to a full season (81 games) and share the blueline with talented off-season acquisition Steve Duchesne and quickly-improving young Russian Alexei Gusarov.  Along with Leschyshyn, those four would comprise the foundation of the Nordiques' defense.  By 1995-96, the core group of Gusarov, Foote and Leschyshyn would play the same gritty roles in Denver that they did with the Nordiques.  Quebec finished second in the Adams Division in 92-93 and Foote scored 12 goals while piling up 168 penalty minutes, carving out a reputation as a rugged shut-down expert.

The final two seasons in Quebec didn't go so well.  Duschene took off to the St. Louis Blues, Foote battled injury problems and the Nordiques returned to the cellar.  Footer played a combined 80 games between 1993 and 1995.

With the move to Denver, however, the fortunes of the newly-named Colorado Avalanche turned immediately for the better.  The Avs acquired talented blueline sniper Sandis Ozolinsh from the Sharks early in the season, and he joined the core of Gusarov, Leschyshyn and Foote in the Avs' own zone.  Those top four would anchor a solid Avalanche team all season, shutting down opposing forwards and striking on the power play from long distance.  Though Foote's offensive statistics were modest, he played relatively injury-free, finishing with 88 penalty minutes in 73 games.

He would prove to be a critical presence for the Avs in the playoffs, along with veteran Uwe Krupp (acquired at the trade deadline).  The two heavyweights would prove unbeatable in their own zone.  Foote played all 22 playoff games, finishing +11 (second to Gusarov among defensemen).  With the perfect combination of talented forwards, defensemen and a goalie named Roy, the Avs easily swept the Florida Panthers in four games to win the Stanley Cup.

In the four seasons from 1996-97 to 1999-2000, Footer continued to anchor the Avalanche blue line, playing the role of the heavyweight shut-down guy (along with bigger but less-talented Uwe Krupp) reliably as always.  His offensive output remained modest but consistent (18-21 points each year), and his hassling of the opposition remained steady.  Despite missing 22 games in 1999-2000 due to injuries, Footer totaled 98 penalty minutes.

The injuries would catch up to him during the Avs' most impressive season, 2000-01.  In November of 2000, Foote fractured his right heel and missed the next 12 games.  Then, just two weeks after returning from the heel injury, he separated his left shoulder, which required surgery and three full months of recovery and rehab.  He missed 35 games and didn't return until late March, just before the playoffs.  Luckily for the Avs, Foote stayed healthy when they needed him the most.  He played all 23 playoff games, racked up 47 penalty minutes and averaged more than 28 minutes of ice time.  Rob Blake was brought in while Foote was injured during the regular season, and once Foote returned, the stacked Colorado blue line was unbeatable.  Foote, Blake and Ray Bourque (with solid support from John Klemm, Martin Skoula and Greg de Vries), comprised one of the most talented defensive corps in NHL history.  With Patrick Roy backing them up, there was little doubt the Cup would belong to Colorado that year.

After the Cup win, injuries would start to become a consistent plague for Adam Foote.  Since the start of the 2001-02 season until the end of 2008-09, Foote has missed 120 games due to injury.  In order, the injuries were to the following body parts: shoulder, knee, finger, groin, groin, hamstring, foot, hamstring, groin, groin, hip, "lower body", ankle, hip, back, triceps, and head.  He missed only five additional games due to illness and a two games for a suspension in 2002 after he cross-checked the crap out of Daymond Langkow.

But even with the missed time, Foote could always be counted on for his solid positioning, his scrappy demeanor and his tough love leadership style as a long-time alternate captain for the Avs (and captain for the Blue Jackets).  Consistently on the ice with the opposition's top line, Foote was feared around the league for years as the guy most able to disarm the other team's best scorers.  In recent years, his complete and total ownage of Marian Gaborik in the 2007-08 playoffs (one assist in six games, Colorado beat the Wild in the first round) has become legendary.  His ability to outplay skilled and speedy forwards much younger than him is now Footer's calling card.

Unfortunately, the 2008-09 season, his first full year back with the Avalanche since leaving for Columbus after the Lockout, was marred by serious injuries to his arm and head.  He missed forty games, and seemed slower and less capable during the 42 he managed to play.  The source of his lackluster performance is unknown, but a combination of age, the inability of his unskilled teammates and poor coaching could definitely be blamed.

Regardless of recent trying times, Adam Foote's legacy in Colorado is secure.  His consistent, gritty and driven playing style, his team-first attitude, his hard-headed leadership and all the other qualities that make him a great defenseman will never be forgotten by Avalanche fans.  His two Stanley Cup wins don't hurt, either.

Hopefully Footer will make it into the Hall of Fame when he finally retires.  Even if he doesn't, he'll always be remembered as one of the very best players to ever wear the Burgundy and Blue, and his high placement among the Top 19 Avalanche Players of All Time will never be in doubt.