The Good, The Bad...And The Ugly

Share All sharing options for: The Good, The Bad...And The Ugly 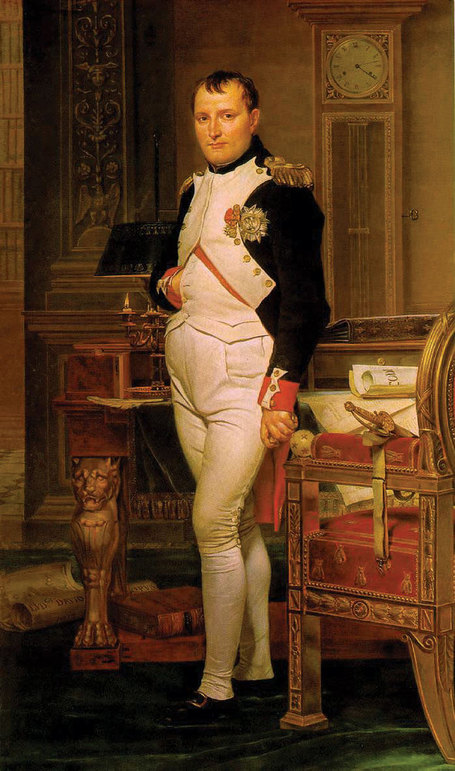 Well, it finally happened. After months of speculation, public embarrassments, Soviet-bloc silence and even one frightening rumor about Pierre McGuire, Napoleon has finally started to get his army together for the upcoming invasion of Russia. I'm sure it will go swimmingly.

With a few mighty waves of his saber, Pierre Lacroix decreed that the Colorado Avalanche coaching staff was no longer fit to reside in the castle. "BANISH THEM" he cried. They were banished immediately. After that was done, he gathered his aides who had been searching high and low across the land for a few field generals to serve under him. Astonishingly, those perfect men were right under their noses the entire time; in fact, they lived right there within the palace walls! What a fortunate turn of events!

And so, our hockey Napoleon has done it again. Presented with an opportunity to generate excitement about the club, Pierre Lacroix has found a way to, yet again, pull the rug out from underneath us. Less than an hour after the wonderful - albeit tardy - announcement that Lacroix was removing the entire coaching staff came the news that Lacroix's "new management structure" looked a heck of a lot like Lacroix's old management structure. From commentary both here and around the net, it looks like some of the serfs are very much in favor of the changes. Others? Not so much. You can put me in the latter camp - and Joe Sacco hasn't even been announced as the new coach yet (hope I'm not spoilling that for anyone).

Here's why I'm less than thrilled with our emperor:

Look, we all knew that Tony Granato had to go, preferably taking his coaching staff with him. Of course, we knew that on April 12th, but I'll cover that a little later on (uh, belated spoiler alert). I'm not a fan of canning coaches just for the hell of it, but when your team plays as badly as the Avalanche played last year, sweeping changes are needed behind the bench. Tony Granato, Dave Barr, Jacques Cloutier, Jeff Hackett and PJ Deluca were all fired. I'm sorry to see them go on a human level (and a little surprised to see Hacket included), but it had to be done. A clean slate, and all that jazz...

This move just astonishes me, and it really has little to do with the qualifications of Sherman. I'm sure he is just as qualified as Francois Giguere was...wait, that just doesn't sound right at all. I feel like I'm in crazy town. We knew Lacroix wasn't going to go outside the organization. No Feaster. No Fletcher. No McNab. Not even Monster McGuire. It's preposterous that he wouldn't give any of those guys even a token look, but we had reluctantly come to accept that Craig Billington would be an acceptable alternative. Instead, it's Sherman. An accountant. I hope that I'm wrong about Sherman. If I am, I will happily send him an apologetic email (just as soon as I find an email address for him). If I'm right, of course, I will have absolutely have no problem littering this site with "I told you so" posts.

Coaching sports is a tough job. I've never been fired from a job, but I'm sure the experience is not an enjoyable one, especially considering the public nature of the position. If I get fired for falling asleep in my cubicle, I can probably make up some lie about "budget cuts" when I have to break the news to my wife and kids. These guys can't do that - their failure is a public one. I know that comes with the territory, but it doesn't make it any easier.

Had the six fired staffers (the five above plus Michel Goulet) been let go in mid-April, it would have been acceptable. Yes, it's a tough break, yada yada yada. Now let's say our proper farewell while you clean out your offices. They weren't let go in April, however. They were left hanging in the wind for a month and a half while we speculated on their future, graded them, mocked them and debated over their very public replacement candidates. Everyone knew that at least Granato and likely a significant chunk of the staff was going to be let go. There is nothing that has happened since April 12th that would have changed their job status. This decision wasn't made today. Let me rephrase that. If that decision was made today, this team is run by fucking idiots. Pierre Lacroix is a lot of things, but he's not stupid. I have no idea why it took so long to announce this move, but I do know this: hanging these guys out to dry for 6 weeks is absolutely, unequivocally disgraceful.

Speaking of disgraceful...I don't know how long Michel Goulet has been with the organization as his avalanche.com bio was removed as soon as the announcements were being made and I'm too lazy to do more than a casual google search on it. I know he spent almost 11 seasons with the Nordiques and that he's been a Director of Player Personnel with the Avalanche long enough to have his name on two Stanley Cups. Is he a good executive? I have no clue. I do know that when you let just two people go in your front office (Giguere and Goulet) and one of those people is a long-time icon of the franchise, you better have a damn good reason. For the record, "just so I can give my son a job" isn't a damn good reason. This isn't fucking Tommy Boy. This is blatant nepotism and it's shocking that Tommy's daddy...er, Pierre didn't feel the need to disguise this ugly move more.

I assume that tomorrow - or perhaps the day after - Dwight will announce Napoleon's new coach. I'll be surprised if that coach isn't Joe Sacco - a guy who's team was 3rd from the bottom in scoring in the AHL last year. If it's not Sacco, it'll be someone else recycled from the family. And so, when all is said and done, after all the promises of restoring the team to it's former glory and restructering the management structure, all that we'll have is a new puppet GM and a different mediocre coach. The faces will be different, but the game will still be the same. The Avs are floundering, but our hockey Napoleon is going to keep marching this club right to Moscow.

I am more than a little embarrassed and ashamed to be a fan of this team. I can't wait to see what's in store for us next.