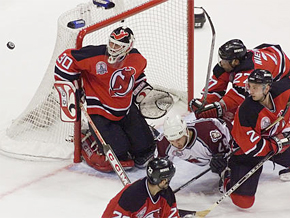 June 4, 2001 - The pivotal Game 5. The Avalanche give up too many odd-man rushes and lose 4-1, pushing them to the brink of elimination.

The Avalanche scored the opening goal in three of the first four games, but the Devils got it Monday with one of their five odd-man rushes in the first period — more than they had in any previous game

"You can't give guys like Mogilny and Elias 2-on-1s, because they're going to score every time they have those chances," Colorado's Alex Tanguay said.