Hey, Would You Believe Joe Sacco Is Our New Coach?

Share All sharing options for: Hey, Would You Believe Joe Sacco Is Our New Coach? 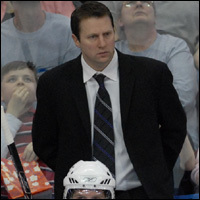 In a completely shocking move, the Avalanche are about to name Lake Erie coach Joe Sacco as their new head coach. This is, of course, a stunning turn of events that we didn't completely call yesterday. This has caught me so much by surprise that I can't even tell you that four teams in the AHL and NHL scored less than 200 goals last year - Colorado was one...and Lake Erie was another. I also didn't research Sacco's record in Lake Erie (60-79-9) and can't tell you that only 3 teams have a worse record than Lake Erie during the two year's of Sacco's tenure.

Sacco, of course, follows Tony Granato, Joel Quenneville and Bob Hartley as Avalanche coaches promoted from within (yes, I'm cheating a bit with Quenneville. Sue me).