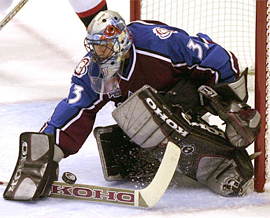 June 7, 2001 - Game 6. Patrick Roy saves the day, shutting out the Devils 4-0 on their home ice and sending the series back to Denver for Game 7. Adam Foote scores a goal and 2 assists (YA RLY)

Adrian Dater told a great story about Roy and this game a couple of months ago:

After the Avs came into New Jersey, down 3-2 in the series, they checked into their hotel. Just so happened that Melanie, former wife of Marty, was staying at the same hotel. She was chatting with a Montreal journalist in the lobby, and the journalist happened to say something about the upcoming Game 6 and what a good game it would be, etc, etc. Melanie said, loud enough to for those standing around her to hear, something on the order of "It’ll be great when we get it (the Cup) tomorrow night."

Well, Patrick Roy happened to be standing within earshot, heard it, and became incensed. Though he didn’t say anything to Melanie apparently, he vowed right then and there that the Devils would not get another goal the rest of the series. And if not for Sykora’s power-play goal in the third period, they wouldn’t have.