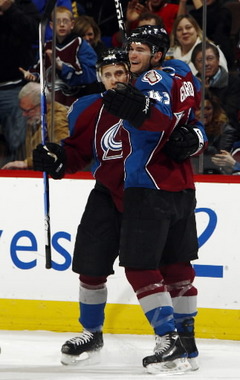 The Lake Erie Monsters season review concludes with a look at the forwards.  There were 13 forwards, including TJ Galiardi (pictured), with NHL contracts, who spent time in Cleveland with the Monsters this season.  Injuries to both Colorado and Lake Erie effected offensive totals for the Monsters.  After posting a 13th ranked power play (17.3 percent) in 2007-08, Lake Erie fell all the way to the bottom of the league with a percentage of 11.5.  The Monsters managed just 2.4 goals per game, 27th in the American Hockey League (AHL).

Those numbers would have been better had players like Brian Willsie, TJ Hensick and Chris Stewart spent the majority of the season in Cleveland.  Both Willsie and Hensick averaged more than a point per game with Lake Erie.  Alas, this trio played in less than 20 percent of the Monsters games this season, as they were all recalled to the Avalanche due to injury woes for the big club.  Philippe Dupuis, who was acquired from the Columbus Blue Jackets in the 2007-08 season, ended up being the scoring champ for Colorado's AHL affiliate.  He led the team with 46 points, just edging team mate Chris Durno.

Dupuis, a native of Laval, QC, made his NHL debut with the Avalanche this season.  He suited up for eight games with Colorado.  His offensive game is more suited for the AHL, where he is likely to experience most of his professional success.  Chris Durno turned out to be a valuable offseason addition for the Lake Erie Monsters.  He led the team in goals with 18.  The 28-year-old also played in a team high 76 games for the club.  As captain, he had a team high in penalty minutes of 131.  In addition, he played two games for the Avs, both of which were his first in the NHL.  While Dupuis is a restricted free agent come July 1, 2009, Durno is unrestricted and is worth a new contract as he was a stable force for the Monsters this season.

Like their parent club, the Monsters suffered from a variety of injuries this season.  Marty Sertich, who was acquired from the Dallas Stars in the off-season, was only able to play in 24 games for Lake Erie due to a concussion.  Concussions also ended the season for 2005 second round pick Tom Fritsche and free agent signee Jesse Boulerice.  Fritsche produced 20 points in 48 games for the Monsters before suffering his season ending injury.  Sertich was able to contribute with 15 points in the 24 games in which he played.  Tough guy Boulerice did score four goals for the Monsters.

Matt Hendricks was also beset by the injury bug.  He was third in team scoring with 29 points in 43 games.  Hendricks was traded from the Boston Bruins to the Colorado Avalanche in exchange for defenseman Johnny Boychuk last summer.  Hendricks proved to be a valuable offensive contributor when healthy and is a gritty hard working player.  Hendricks also made his NHL debut this year with Colorado, suiting up in four games.  The AHL veteran is set to become an unrestricted free agent.

Like Hendricks and Durno, Nathan Smith was another savvy AHL veteran that was added to the Monsters roster this season.  Smith, a former first round pick of the Vancouver Canucks, came over from the Pittsburgh organization.  While he produced 50 points in 68 games for the Baby Penguins in 2007-08, injuries reduced him to just 16 points in 44 games this year.  The soon to be unrestricted free agent finished the season on injured reserve with a knee injury.

Per Ledin was expected to play a majority of the season with the Colorado Avalanche when acquired last summer.  After he was cut from the training camp roster in September of 2008, Ledin had difficulty adjusting to the North American game.  Then came the foot injury which allowed him to play in only 58 games for the Monsters.  Ledin contributed offensively for  the club after an adjustment period and even reached double digits in goals (11).  Yet, his goal to play in the NHL didn’t occur until late in the season, with a three game stint in Denver.  Rather than exploring other NHL opportunities in the summer, the Swedish agitator returned to Europe after signing a multi-year contract with HV-71 (Swedish Elite League).

Codey Burki’s professional career has been marred by injury and inconsistency.  Work ethic was a question mark for Burki during his draft year.  A potential first round pick, Burki fell to the Avs 59th overall in the 2006 NHL Entry Draft.  In 2006-07, he was 5th in the Western Hockey League in scoring.  A brilliant skater, Burki has yet to produce offensively, scoring just 19 points in 54 games for the Monsters this season.  The 2009-10 season is a contract year for Burki, who will need to stay healthy and become a more consistent scorer.

TJ Galiardi perhaps made the biggest impression of the late call ups for the Avalanche this season.  Galiardi is lanky, yet he is highly skilled.  Playing wing at times with the Monsters, Galiardi found himself centering a line for the Avalanche as the injuries continues to mount in Colorado.  He scored three goals in 11 games, all against the Vancouver Canucks.  With the Monsters, Galiardi recorded 27 points in 66 games.  He can exceed at the pro level with his speed, but could probably add some bulk to his 6’2" frame.

Galiardi is the first player from Colorado’s 2007 draft class to make his NHL debut this year.  More will certainly follow and it’s likely some of these Monsters will resurface at Pepsi Center sometime during the 2009-10 season.