Is The Future So Bright...?

Share All sharing options for: Is The Future So Bright...? 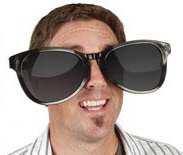 Yesterday, Avalanche fans were treated to a surprisingly competent article from Woody Paige in which we learned that there actually was a bit of method behind Pierre Lacroix's madness this summer. This all coincides nicely with Joe Sakic's reassuring rebuilding comments during his retirement press conference as well as Matt Duchene's dazzling performance at the Avs' Development Camp.

So, were all good now, right? We've got Lacroix's recipe for success...

Two great young centers and a great goalie, surrounded by a mix of young and experienced complementary players (with speed on offense and toughness on defense); a young, smart, rising head coach, balanced by excellent, specialized assistants; a solid scouting staff; and a hard-hat executive corps harmonizing.

...so let's just kick back and prepare for the revelry.

Well, here's the thing: we're not there yet. We seem to have the two great young centers (although that's no sure thing yet for either Paul Stastny or Matt Duchene) and I'm going to give you the solid scouting staff and executive team working together. Beyong that...? Is Craig Anderson a great goalie? Does anyone think our existing stable of young players and experienced players are good enough? And is Joe Sacco the next Marc Crawford...or the next Tony Granato?

Sakic mentioned that the Nordiques were a rebuilding club when we first started, but noted that the payoff for those rough early years was worth it (two Stanley Cups). He clearly was attempting to draw a parallel to the Avalanche today. Keep in mind, though, that when Sakic was drafted in 1987, it was a long time before the team turned the corner. The Nordiques (with Sakic still in Swift Current) won 32 games in '87...and that was their BEST season over the next five years. In each of next 3 seasons - Sakic's first three - Quebec finished with the worst record in the league.

The Avalanche won 32 games last year, much like those Nordiques back in 1987. If Duchene plays next year and even if he plays as well as Sakic (who had 62 points his rookie year)...the Avs are probably still going to be a worse team next year and for the next few years unless the other young players in the system suddenly improve dramaticaly.

Even more sobering: drafting Sakic wasn't the turning point for the franchise. He certainly was an excellent pick, but he was just the first piece of the rebuilding puzzle, not the final one. From 1987-1991, Quebec drafted Joe Sakic, Bryan Fogarty (who was traded for Scott Young), Curtis Leschyshen, Stephane Fiset, Valeri Kamensky, Alexei Gusarov, Mats Sundin, Adam Foote, Owen Nolan, Andrei Kovalenko, Claude Lapointe, Rene Corbet and, of course, Eric Lindros. Sakic was a superstar and the cornerstone of the franchise, but without all of these other assets there's no Stanley Cups.

The point I'm trying to make is this: drafting Matt Duchene may just the beginning of the rebuilding process and there are still going to be some rough times ahead. The Avalanche have drafted some good young players over the last few years, but it would take extraordinary luck for our existing stable of prospects to develop on par with the list above. The Colorado Avalanche are still a great deal of talent away from contending for a Cup, and the situation isn't bettered by dumping assets like Ryan Smyth in cost-cutting deals.  More than any other part of Pierre Lacroix's blueprint, having several lottery picks and a string of excellent drafts was the foundation for the Cup building; that gave Lacroix the clay that he was able to expertly shape into a winner. But without the clay - the talent - you can't build anything. Frankly, the Avalanche need a few years of terrible seasons to acquire that talent (see Penguins, Pittsburgh). Are you prepared for a few more terrible Avalanche seasons?