Getting To Know You: Darren Haydar

Share All sharing options for: Getting To Know You: Darren Haydar 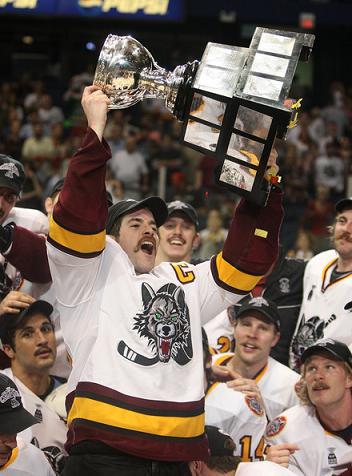 One of the more interesting pick-ups by the Avs this off-season has to be Darren Haydar, an undersized right winger with limited NHL experience who has set the AHL aflame over the past several years.  He's a little guy---just 5'9" and 170 pounds---but he's quick and has established himself as a consistent goal-scorer at the minor league level.

Haydar was drafted in the 9th round (248th overall) of the 1999 Entry Draft by the Nashville Predators.  Despite great success at the ages of 16 and 17 in the Junior A Ontario Provincial Hockey League, his low draft position is attributable to both his stature and the lower-tier league in which he played.

At 18, Haydar went to the University of New Hampshire.  During the 1998-99 season he scored 31 goals and 61 points in 41 games, earned spots on both the Hockey East All-Rookie Team and the All Star Team, and was named Hockey East Rookie of the Year.  The following years would see a decline in his production but he would still be named an All Star in 1999-2000.  During his senior year at UNH (2001-02), Haydar scored 31 goals and 76 points in 40 games, and led his team to their first ever Hockey East conference championship, beating Maine 3-1.  Haydar's honors that year included another All Star appearance, Hockey East Tournament MVP, Hockey East Player of the Year and he was named an NCAA East First Team All-American.

In 2002-03, Haydar joined the Milwaukee Admirals of the AHL and had similar success.  He scored 29 goals and 75 points in 75 games, made the AHL All-Rookie Team and was named AHL Rookie of the Year.  Despite the big impact in the minors, Haydar got only one brief call-up to the NHL and played just two games for Nashville, scoring no points.  He would return to the AHL with the Admirals for three more seasons, including a wildly successful 2005-06 campaign in which he scored 35 goals and 92 points in 80 games.

In 2006-07, Atlanta acquired Haydar as an unrestricted free agent and sent him to their AHL affiliate Chicago Wolves.  That year he went on an absolute tear, netting 41 goals and 122 points in just 73 games.  He also set a new AHL record for scoring in 39 consecutive games.  He would be an All Star that year, the league's leading scorer, and would receive the Less Cunningham Plaque as the AHL MVP.

The next season Haydar would miss some time due to a brief call up by the Thrashers, but still managed 58 points in 51 AHL games.  While the previous year was marked by many individual honors, the team would come first in 2007-08.  With Haydar as captain, the Chicago Wolves would win the Calder Cup by beating the Wilkes-Barre/Scranton Baby Pens four games to two.

During his Atlanta call-up that same year, Haydar played 16 games and scored 8 points.  His lone NHL goal came against Martin Brodeur and the Devils on October 13, 2007.

Despite his success with the Wolves and his decent showing in the NHL, Atlanta let the free agent Haydar sign with the Detroit Red Wings in 2008-09.  Unfortunately for Haydar, the Wings' depth prevented him from getting any additional call-ups.  To ease his pain, he scored 80 points in 79 games as the captain of the Grand Rapids Griffins, Detroit's AHL affiliate.

Haydar managed to continue his consistently excellent AHL production despite stress at home.  In April of 2008, his girlfriend Sara Schuster was diagnosed with throat cancer and underwent dangerous and extensive surgery during the hockey season.  Haydar managed to see her as much as possible while still playing hard, and Schuster appears to be improving steadily from her ordeal.

The Avs signed Haydar as an UFA earlier this month.

Considering the lack of experience and talent across all positions of the Avalanche offense as the team undergoes an extensive rebuild, Haydar has an outside chance to make the team straight out of training camp in September.  While it's more likely that he'll make a big impact with the AHL Lake Erie Monsters, his speed and offensive touch could prove impressive against fellow right wingers David Jones and Chris Stewart.  Haydar's size will work against him, though.  That said, his .50 point-per-game average in the NHL during 2007-08 would rank him above both Jones' and Stewart's 2008-09 efforts and more in line with guaranteed second- or third-liner Marek Svatos.  With a team so low on experience and ability, Haydar could provide a few points (and a bit more reliably than others) if given a shot to play extended time with the Avs.