Share All sharing options for: Top Avs Of All Time: #1 Joe Sakic 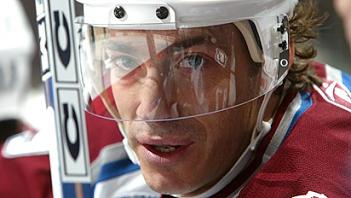 Joe Sakic is not only one of the greatest hockey players in the history of the sport, he's also the greatest player to ever wear the Burgundy and Blue.  "Super Joe," as he's known, has meant everything to the Colorado Avalanche throughout the stellar history of the team.  Until the 2009-10 season, he is the only captain the team has ever known, and the quiet, respected leader that drove an amazing collection of talent to two Stanley Cups, two Presidents' trophies, and eight consecutive division titles.

Joe Sakic is a player with few peers, and a leader with even fewer.  He's the rock upon which the Colorado Avalanche was built for so many years.  His skill, his finesse, his humbleness and his courage are respected in every corner of the hockey world.  He's a legend in his own time.  And even though that time is now up, Joe Sakic will forever be number one on the list of Top 19 Avalanche Players of All Time.

Sakic's junior career began at the age of 16 with the Burnaby BC Selects, in his home town of Burnaby, British Columbia.  There, he immediately carved a name for himself, scoring 156 points in 80 games.  His uncanny knack for being in the right position at the right time, along with his killer wrist shot were already being developed.  By the end of his first season in juniors, he joined the Lethbridge Broncos of the WHL, but only played three games and scored no points.  The next season, 1986-87, the Broncos moved to Swift Current and Sakic renewed his offensive assault on each and every opponent.  In 72 games he scored 60 goals and 133 points.  Unfortunately, that glorious year on the ice was marred by a tragic bus accident that claimed four Broncos teammates.  Sakic was unhurt, but has declined to comment on the night of December 30, 1986 whenever asked about it throughout his career.

Despite the tragedy, Sakic pressed on.  He finished that season and was chosen in the first round (15th overall) in the 1987 Entry Draft by the Quebec Nordiques.  Only three other players from that draft went on to play more games than Super Joe, and none of them out-scored him: Brendan Shanahan (2nd, New Jersey), Glen Wesley (3rd, Boston), and Luke Richardson (7th, Toronto).

In 1987-88, Sakic finished his junior career with the Broncos by scoring 78 goals and 160 points in 64 games.  His destiny as a top NHL forward was assured.  He got called up to Quebec with no minor league experience in 1988, and played 70 games his rookie year, scoring 62 points.  His big breakout would come during his sophomore season of 1989-90, though, when he netted 39 goals and totaled 102 points.  Unfortunately, his Nordiques team was awful that year, and he finished -40. 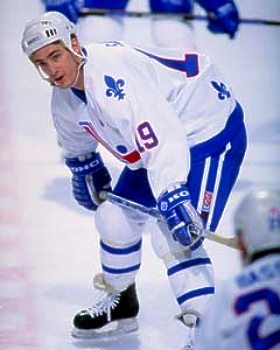 Despite the struggles of the team, Sakic's early years in Quebec were played with legends like Peter Stastny, Michel Goulet and Guy Lafleur.  As their careers ended, Sakic picked up the torch and ran with it.  He was first named co-captain of the team in 1990-91, then captain for good in 1992-93.  The franchise would never know another.

After seven stellar years in Quebec (points-per-game average: 1.24), the Nordiques relocated to Denver and became the Colorado Avalanche.  Sakic retained the captaincy of the new team and immediately led the talented squad to new heights.  Sakic hit his stride in Denver, and in 1995-96 he scored 51 goals and 120 points in 82 games---the best year of his career, statistically.  The Avalanche would go on to win the Cup that season, and Sakic would take home the Conn Smythe trophy as playoff MVP.  He scored 34 points in 22 playoff games, laying the groundwork for his reputation as one of the greatest playoff performers in NHL history. 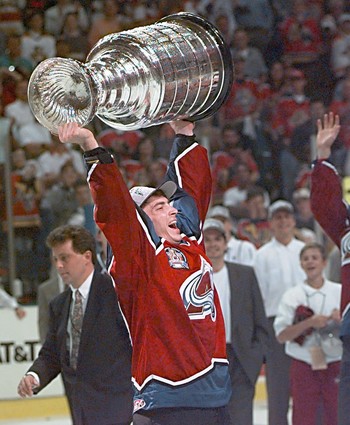 The first season in Denver was just the beginning of the Avalanche reign atop the Western Conference during the late 1990s and early 2000s.  Though all four seasons from 1996-97 to 1999-2000 were shortened by minor injuries, Sakic continued to punish opposing goalies with his quick skating, his perfect positioning and his killer wrist shot.  Only once did he fail to average more than a point per game. 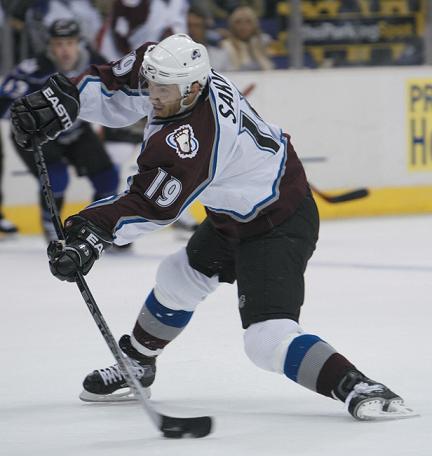 By the legendary 2000-01 season, Sakic was healthy and back on form.  He led a team filled with names like Bourque, Forsberg, Hejduk, Foote, Blake, Tanguay, Drury and Roy to the best regular season in the NHL and another Stanley Cup.  Despite the loss of Forsberg in the finals to a ruptured spleen, Super Joe kept his composure as always and worked his magic over the course of 21 games (scoring 13 goals and 26 points) to complete Mission 16W and win a Cup for Ray.

At the end of game 7, after the Avs defeated the defending Cup champion New Jersey Devils, Joe Sakic did the classiest thing I've ever seen a hockey player do.  Though it is traditional for the captain of the winning team to hoist the Stanley Cup first, Sakic took it from commissioner Gary Bettman and immediately handed it to Ray Bourque---both with huge smiles on their faces.  With Gary Thorne shouting "Raymond Bourque!!" and the Pepsi Center exploding in wild applause and screams of joy, Bourque raised the Cup above his head and tears poured from hockey fans' faces from Boston to Denver.  That moment, more than any other in my mind, defined Sakic's career.  Great enough to win the Cup for a second time, but humble and classy enough to pass it along to whom it meant the most.  Watching the footage from that ceremony still brings tears to my eyes.

Sakic took home the most hardware of his career in 2000-01.  For his 82-game, 118-point regular season, he was awarded his only Hart Trophy, the Lester Pearson Trophy for best player as selected by the NHLPA, and the Lady Byng for player who exhibits the most sportsmanly conduct.  Not too bad for a guy who also won the best trophy of them all, the Stanley Cup. 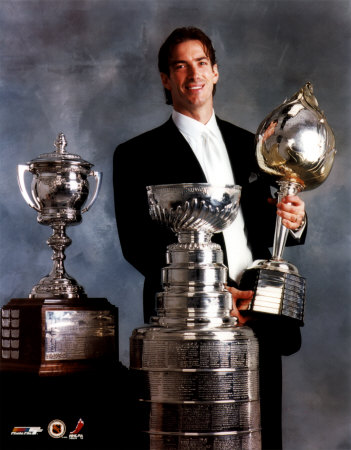 Though the Avs have not won a Cup since that amazing year, it hasn't been because Joe Sakic lost his touch as either as an amazing hockey player or as a strong team leader.  Though the talent of the roster and the coaching staff has declined in Denver over the years, Super Joe kept being super.  During the five seasons from 2001-02 to 2006-07, Sakic only missed significant time to injury once, and only once averaged less than a point per game.  In 2006-07, the last full year he played and the first year the Avalanche missed the playoffs, Sakic scored 100 points.  He was 37 years old.

Unfortunately, his luck of avoiding injuries over the years finally ran out.  In 2007-08, he played only 44 games due to a sports hernia and groin problems.  He still managed 40 points.  In 2008-09, despite an apparent recovery from the previous years' woes, he appeared in only 11 games before succumbing to a herniated disc in his back.  While recovering from that injury, a freak snowblower accident nearly severed three of his fingers and he missed the rest of the season.  Without him, the injury-riddled and inexperienced Avs missed the playoffs for the second time in three years.

But while Sakic's final years in the NHL were lackluster due to injuries and bad luck, his legacy as an incredible hockey player and respected leader have not been diminished.  He's still widely regarded as one of the greatest team captains in the history of the NHL, and he sits near the top in most major statistical categories.  1378 games played.  625 goals.  1016 assists.  1641 points.  188 playoff points.  19 playoff game-winning goals.  12 All Star appearances.  One each of the Hart, Conn Smythe, Pearson and Lady Byng trophies.  Eight division titles.  Two Presidents' trophies.  One Olympic gold medal.  Two Stanley Cups.

There is no tribute that could possibly do Joe Sakic or his legacy with the Nordiques and Avs true justice.  But the collective love of all Avalanche fans and many hockey fans everywhere easily makes up for it.  Super Joe is a true legend of hockey, and his leadership, skill and character will never, ever be forgotten.

All he wanted to be was a hockey player.  He ended up being so much more.