Avalanche By The Numbers: #3

Share All sharing options for: Avalanche By The Numbers: #3 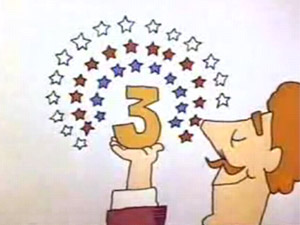 I thought this was going to be an easy little series, but it turns out the research makes this a little slower going. I was figuring I could bang out a couple a day until the start of the season, but that doesn't seem like it's going to happen. This is still keeping me entertained, however, and so it continues.

3 is, according to De La Soul, the magic number. Like #2, it's a number traditionally worn by defensemen. Indeed, the 4 Avalanche players who've worn it have all been defensemen (we've got a couple more entries before we get to the first forward). I have to estimate the totals a little bit (see Pascal Trepanier below), but it looks like #3 has been worn in about 592 regular season games and 82 postseason games for a total of 674 games. 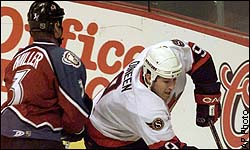 1996-2000: Aaron Miller. Miller played 361 games (301 regular season / 60 postseason) for the Avs - tops for this number - and yet it's surprisingly tough to find photos of him. It appears that Miller wore #3 for UVM as well as for the Cornwall Aces (speaking of aces, that logo is, in spades). As we recently learned, #3 was retired by the Nordiques for J.C. Tremblay so when Miller got some limited duty with the Nords in '93-'94 and '94-'95 he wore #44 and #31. It appears that he kept #31 when he played 5 games in Denver after the move (again, photo evidence is sadly evading me). Beginning in 1996, Miller moved from a part-timer to a regular and changed to his preferred #3. He kept that in LA after being moved in the Rob Blake deal but had to move to #4 when he went to Vancouver because #3 was taken by Kevin Bieksa. 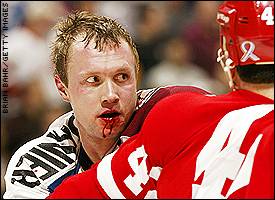 2001-2002: Pascal Trepanier: Finding pictures of Aaron Miller was tough. Finding a photo of Pascal Trepanier in an Avalanche jersey was nearly impossible. I'm not even sure if Trepanier is wearing #11 above. Trepanier has worn 3 different numbers with the Avs; I don't know if that's the most, but it has to be close. He wore #7 in '97-'98 and then switched to #27 when he was claimed in the waiver draft by the Ducks. When he returned to the Avs in 2001, #27 was in use by Scott Parker. You think Trepanier thought about asking Parker to change numbers? I don't either. Trepanier went with #11. However, he changed to #3 later in the season after Darius Kasparitis was aquired. Trepanier played in 74 games that year. I don't know how many were played with each number, but Kasparaitis played in 11 games, so I'll assume that same number for Trepanier wearing #3, plus the 2 postseason games that he appeared in. Trepanier wore #27 in Nashville (for all of one game) and overseas he's worn #3 and #7 that I could find and hockeydb lists him as having worn #7, #11 and #18 at various points in his AHL career. 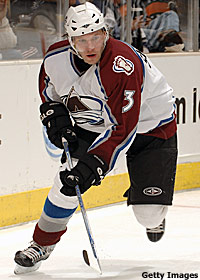 2003-2008: Karlis Skrastins: Finally, something that's a little easier to google. Skrastins began his North American career wearing #40 for the Norfolk Admirals. He wore that same number for two games with the Predators but then switched to his familiar #3. He's worn that number ever since, with both the Avalanche and the Florida Panthers. Now that he's with the Dallas Stars, he'll have to change, as Stephane Robidas owns #3. He's already listed on their roster page as wearing #37 - which would apparently be a combination of his NHL #3 and the #7 he wears internationally. In all, Skrastins appeared in 275 regular season games and 20 postseason games for the Avalanche. Of course, along the way he broke Tim Horton's iron man streak for defensemen; interestingly, while Horton was most known for wearing #7 with the Maple Leafs, he also wore #3 for a season or so with the New York Rangers. 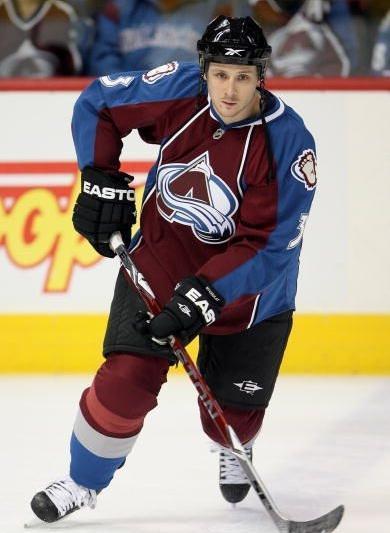 2008-2009: Lawrence Nycholat. I had been unable to find any photos of Nycholat from his 5-game stint with the Avalanche this spring, but Googlemaster Aph was able to help me out. The journeyman defenseman has worn 28, 3, 2, 3, 32 and 3 for the Rangers, Capitals, Senators, Senators, Canucks and Avalanche. I know he's worn 28 and 37 at various points in the AHL and IHL, 25 in the ECHL and 5 in the WHL. A couple more years and he might have them all covered. It looks like he's been assigned 32 again in Vancouver.