Avalanche By The Numbers: #4

Share All sharing options for: Avalanche By The Numbers: #4 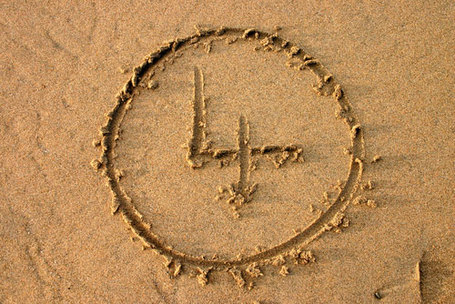 Our sizzling sweater series resumes today with a look at...you guessed it: #4. Of the numbers we've done so far, quatro has been worn by the most number of players (5), the most number of games (861). Three of the five players who've worn it have their names on the Cup for the Avs (although one was technically a #44 at the time). It's a number with an interesting history for sure. Once again, it's a number worn mostly be defensemen (mostly) and, indeed, all 5 Avs who've worn it have been d-men. 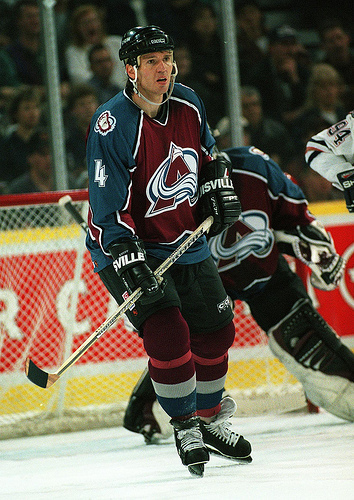 1995-1998: Uwe Krupp. Krupp, of course, is one of 3 in today's story with their name on the Cup for the Avs. He's also one of two who won a 2nd Cup later on with another team (sigh). My German is a little rusty, but I believe this is Krupp at the start of his career wearing #5. From then on, though, he seemed to favor 4s. In his one partial AHL season, he wore #4 but had to don #40 when he got to Bufalo because of the presence of Jim Korn. Korn departed the next year, but Krupp waited one more season to take his favored number. He kept #4 during his stint in Long Island and Quebec and, of course, kept it when the team made the move to Denver. He'd keep that number in Detroit (ugh) but when he went to Atlanta late in his career, #4 was taken by Chris Tamer so Krupp did the now-familiar deal of doubling his number. He also wore #44 in international competition.

via av.rds.yahoo.com
1998-1999: Cam Russell. I think that's Cam Russell above. He spent just 35 games in an Avalanche jersey after almost 10 seasons with the Blackhawks. It was hard to find the photo of Cam in an Avalanche uniform, and it was tough to find other photos of Cam as well. I have no idea what Russell wore for the Hull Olympiques. He wore #6 for the Indianapolis Ice and then 52 for his first two seasons in Chicago. In 1991, Russell changed from #52 to #8 - a number unavailable to him previously because of Treny Yawney in Chicago and Brian Noonan in Indianapolis. In 1998, he was traded to the defense-depleted Avalanche (this is the year the Avs dressed 14 different defensemen). Russell's #8 was unavailable - it was the number of Sandis Ozolinsh, at the time holding out in a contract dispute - so Russell went with #4. 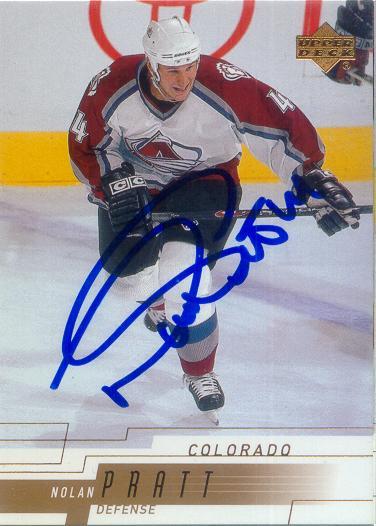 2000-2001: Nolan Pratt. Like Uwe Krupp, Pratt has generally favored numbers with the number 4 in it throughout is career. He wore #4 and #34 at various stops in the AHL before debuting with the Whalers (wearing the newb #41). In 1997, the Whale sadly moved to Carolina and Pratt went to his preferred #4. In 2000, he was traded to the Avs in the Sandis Ozolinsh deal and retained his #4 (above). He changed to #44 midseason, though, when the Avs acquired the next guy on the list - Rob Blake. Pratt only played 46 games that year, and I don't know how many he played after the Blake deal, but I do know he played in at least one. Pratt did not play in the postseason, but, if I understand correctly, should have his name on the Cup by virture of his 41+ regular season games that year. The following season, Pratt would move to Tampa, where he had to continue with #44 due to the presence of Vinny Lecavalier, and played on a Cup-winning team there. Pratt later played a season in Buffalo, going back to #4. He's currently playing in the KHL and is back to #44. 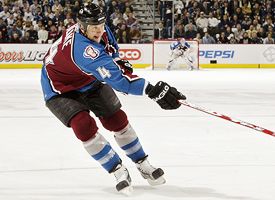 2001-2006: Rob Blake. Blake, of course, is one of the Top 19 Avs of all time, and has worn the #4 more than any other Avs. Including playoffs, Blake has played in over 1300 NHL games. As far as I can tell, all have been in the #4. I couldn't find a photo, but I did discover that Blake wore #3 in college, but the 4th round draft pick (coincidence?) wore #4 out of the starting gate with LA. Could it be that he preferred #3 but went with #4 because of the presence of Tom Laidlaw? What's interesting (to me) is that Blake signed late in the '89-'90 season and joined the Kings for the final few games. He took #4 which had been worn earlier that year by current Kings' analyst Jim Fox. Fox had suffered a career-ending knee injury that year, although it still seems kind of odd that Blake would be given a number worn by a veteran that year. In turn, Fox was wearing #4 instead of his normal #19 because he gave 19 to Larry Robinson when he was signed by the Kings the previous summer. So, Fox essentially gave his number to TWO future Hall of Fame defensmen in less than one year. After his long stint with the Kings and his time in Colorado, Blake returned to LA (where, as we learned in the Aaron Miller write-up, his #4 was still waiting for him). He's now with San Jose, still wearing #4 (Kyle McLaren used to wear it, but was banished to Worcester last year to make room for...Rob Blake). At least he got to keep his number... 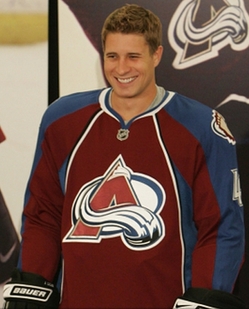 2006-Present: John-Michael Liles. Johnny Hot Pocket is #2 on the list of games played in a #4. He actually just passed Blake last season in games played for the Avs, but, of course, a bunch of those games were played wearing #26 before he and Paul Stastny did their switcheroo 7 games into the 2006 season. At that point, he gave his #26 to Paul and, after getting Rob Blake's blessing, went to #4. Liles wore #4 at Michigan State and #2 during his brief 10-game stint with Hershey after signing with the Avs. I couldn't find photos of Liles playing for Iserlohn during the lockout, but I do have a couple of him on Team USA teams, wearing #8 and #27.