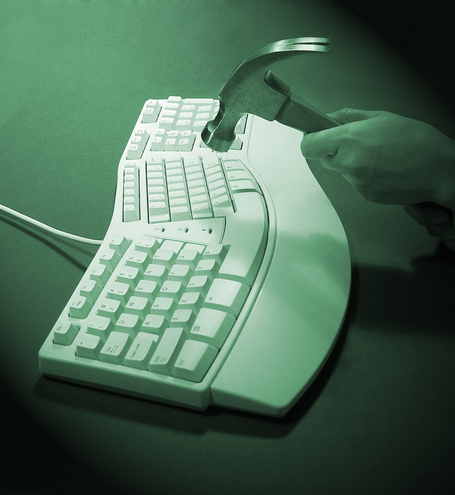 You may have read Brandon Worley's excellent roundtable discussion between Greg Wyshnyski, Mike Heika and Bob Sturm about the role of "new media" (bloggers) in professional sports. If you didn't, you should definitely check it out (part 1 AND part 2). Go ahead. I can wait.

Terrific stuff, eh? The story of how new media is changing the way sports are being covered is interesting to both Joe and myself and there have been numerous discussions on the subject hosted here at MHH. It's certainly a compelling story; some day, all main stream media will cease to exist, allowing the bloggers to rise up from the post-apocalyptic ashes and rule the world. It's like Road Warrior, except with laptops instead of muscle cars. Also, I'm much more handsome than Mel Gibson. Taller too, I'm sure.

Frankly, I don't think legitimate, MSM sports reporting is going to go away for a long, long time. That doesn't mean that blogs - er, new media - aren't going to become a bigger and bigger part of covering professional sports (hockey too!). They will, in some way or another. Still, I don't pretend to know exactly what the future holds for bloggers like me. If I did, I would have made a killing already on the stock market...or at least have avoided having my 401k wiped out. For the time being, I'm just along for the ride, eternally looking for the tanker of gas in the middle of the desert. Or something.

As you know, the Colorado Avalanche have not exactly embraced the new ways with open arms. While some teams are experimenting with credentialing the occasional blogger, the Avs are still stuck on media v1.0. Capitals owner Ted Leonsis is frequently outspoken on his blog and Panthers president Michael Yormark has been throwing out the occasional tweet. The Avalanche have used Twitter, too. Once. This is not an organization that wants to think outside of the box media-wise.  Joe and I have been saying that for years, of course, as our rapidly growing little Avalanche blog has gone completely ignored by the team. And now I've experienced it firsthand.

I have heard talk lately that the Avalanche are reaching out a little more, trying to better get their message to the fans. How else do you explain Pierre Lacroix speaking candidly with Woody Paige? Or that one, lonely tweet? I decided that this might be a good time to reach out a little to the organization and I sent a very awkwardly-worded email to the team requesting to be added to the email distribution list. This list isn't fancy - it's basically the team press releases freely available on the site. And it's certainly not a priviliged list, as it goes out to a bunch of mostly-MSM folks who cover the Avs or just hockey in general. Still, I felt being on that list would be helpful to me, as I check my emails constantly during the day and my rss feeder (netvibes) is often slow to update - like Ossi Vaananen slow.

To my pleasant surprise, I was added to the list.

[EDITORS NOTE: The above article hasn't changed since originally posted. Everything from here on, including a couple of deleted paragraphs, is completely new]

If you read this earlier today, you would have read a couple paragraphs about how I mysteriously stopped receiving these emails followed by the same old "same old Avs" rhetoric you have come to expect from yours truly. While it made for a great hook, it was wrong. I was wrong. Despite working in a computer-related field, it appears I have been defeated by the technological magic of a freaking spam filter. I feel pretty stupid about having made that error, but I'm more upset that it looks like I recklessly jumped to a conclusion even though I made a sincere effort to discover what was happening to the emails. Here I am writing an article about how bloggers deserve to be treated more professionally and I end up appearing...well, amateurish.

In the end, I missed out. This would have been a terrific springboard to share the news that this blog had inched to a little more legitimacy with a club that had been notoriously tight-lipped in the past. Instead, I got the story wrong and went in the completely wrong direction. Perhaps the professionals have a little more time before us bloggers take over the world.