(New) Avalanche by the Numbers

Share All sharing options for: (New) Avalanche by the Numbers 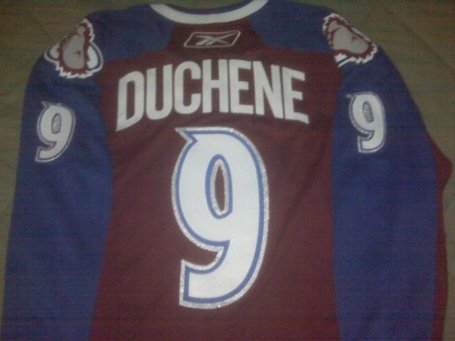 Inspired by this HF thread, I thought I'd take a little detour from the historical numbers thread to look at the potential numbers for the newcomers with the Avalanche. The above photo goodness is courtesy of Don Balls who is hoping that Doogie chooses #9 (Rocket Richard's number) as expected. No matter what, I doubt it's going to be #1...

As for the rest of the newbies...

Craig Anderson has worn #31 for most of his pro career. Although he wore #1 for the Guelph Storm, he's worn #31 for the Blackhawks, Panthers as well as for the Norfolk Admirals (couldn't find a pic, but here's the hockeydb listing). The only exception seems to be the year he spent with the Rochester Americans, when he wore #30 (looks like he likes defensemen as much he likes ice girls). I don't know why Andy prefers #31, but since it's currently taken by Peter Budaj he'll have to change. My money would be on 30.

Kyle Quincey would seem to favor #4. He wore that number with the London Knights of the OHL. It looks like that was in use when he first joind the Wings AHL affiliate, and he ended up with #22. He made an appearance with the Red Wings that year, but #4 was in use by either Jamie Rivers or Cory Cross.  #44 was taken too (Mark Mowers) in case Quincey decided to do the whole double number thing. In the end, he landed #45. Later, Quincey got his #4 but then he got all waived and stuff. When he got the the Kings, he had an issue. He couldn't take #4, because that was Rob Blake's number; Blake wasn't with the Kings at the time, but I don't imagine they're going to be handing that out anytime soon. #45 was taken by Jonathan Bernier. Quincey ended up with #27. #4 is taken with the Avs, but #27 is likely his if he wants it. Or maybe he can fight Chris Durno for #45?

Tom Preissing wore #20 in college (that sure looks like a #0, doesn't it?) but has worn #42 with the Sharks, Senators and Kings as well as with the Manchester Monarchs this spring. I don't know what number he wore in Krefeld during the lockout, but suffice to say that he's fond of 42 (my own favorite number, by the way). Of course, #42 is taken by Chris Stewart, but I suspect he'd prefer the reverse #24, which he wore for both Kingston and Lake Erie. But 24 is taken by Ruslan Salei, so who knows what will happen here?

David Koci seemed to prefer #3 in the WHL and AHL (Scranton, Norfolk), although he wore #26 one year in the ECHL. #3 was retired by the Blackhawks (for Keith Magnusun and Pierre Pilote) in 2008. Technically, it was around when David Koci joined the team in 2006, but I don't think it was available to him. He went with #48. Last year, Koci joined the Lightning. It appears that #3 was available (Doug Janik had worn it the previous season but departed a few weeks after Koci joined the team), but it went to former 1st rounder Ty Wishart; instead Koci wore #33. When Koci was claimed on waivers by the Blues (fun fact, 3 of the 4 newcomers on this list were waived last season) he stuck with #33 (#3 is retired in St Louis for Bob Gassoff, a player who was killed in a motorcycle accident in the late 70s). Obviously, #33 isn't an option in Denver. #3 currently is (Lawrence Nycholat wore it during his brief stay last spring), so I wonder if Koci will go that route?

If I was a betting man, I'd put big money on Matt Duchene picking #9 (*big sigh of relief from Don Balls*), moderate money on Kyle Quincey sticking with #27, small money on David Koci going with #3 and Craig Anderson going with #30 and I wouldn't place any bet on Tom Preissing (although I suspect he'll end up with #42 after Chris Stewart makes a change). I'm not a betting man, however, so I'll just sit back and wait.