Blackout Would Be Another Black Eye For The NHL

Share All sharing options for: Blackout Would Be Another Black Eye For The NHL

[Editor Note: We're now 10 days away from opening night. I'm bumping this back up and will continue to do so until either this ridiculous stalemate ends or Blackout Thursday occurs] 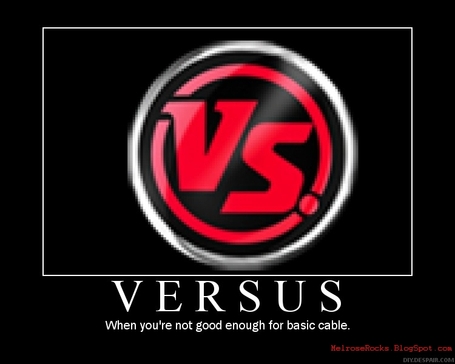 In three weeks, the greatest player to ever wear a Colorado Avalanche uniform is going to have his number retired. And, if you live in one of the 18 million homes in the US who subscribes to DirecTV, you may not get to watch it.

This summer has been a rough ride for the NHL. Although Gary's team managed to win the Stanley Cup, the rest of the summer has been one negative story after the other. We've had the bankruptcy mess in Phoenix, ownership struggles in Tampa, the NHLPA shakeup, a former owner sentenced to prison for fraud and a stagnant salary cap leading to some unemployed veterans (not to mention some clumsy attempts to circumvent the salary cap). In light of that, my anger over the DirecTV / Versus debacle may seem minor to some; to me, it's a blockbuster.

For those who've missed it, here's a brief recap. On August 31st, DirecTV's contract to air Versus expired without an agreement on a new deal and the channel was yanked. Of course, both sides have been very willing to blame the other side publicly. DirecTV says that Versus wants a 20% increase that the lousy channel doesn't warrant. Versus says that they are asking for fair terms, but balked when DirecTV wanted to move them off of their current tier. Of course, the fact that Versus is owned by DirecTV competitor Comcast is a major factor in this mess.

Versus has exclusive broadcast rights to 54 NHL games in the upcoming season. If Versus carries the game, no one else in the US can broadcast it. So if you have DirecTV, even if you've plopped down $165 for the Center Ice package, you will not see any of the Versus games. This includes half of the games on opening night; fans of Boston, Washington, Colorado and San Jose who are anxious to see their team in action will be out of luck. DirecTV with Center Ice will be able to watch the other two games (Montreal at Toronto, Vancouver at Calgary), but they will be the only DirecTV customers able to watch hockey that night.

Avalanche fans have a particularly difficult night, as Joe Sakic is having his number retired before the game. Thankfully, the retirement ceremony will be carried by Altitude, so DirecTV customers in the Colorado market or who subscribe to either the Sports Pack or Center Ice should be able to watch the festivities. But once the ceremony is over and it's time to drop the puck on the new season (and, perhaps, Matt Duchene's first NHL game): a big, fat nada.

To date, the NHL hasn't had a ton to say publicly about this looming PR disaster, unless you count NHL spokesman Frank Brown's embarrasingly flippant calander pointing back in August. I hate to tell you how to run things, boys, as you've got the NHL running so smoothly at the moment, but you might want to get on this. Having your opening night games unavailable to a substantial percentage of your US market isn't going to be good for the league, no matter how much "cost certainty" you've got going on. I know that Gary has come up with brilliant plans for folks who don't have Versus in the past, but I'm not sure his whole find-a-hotel-with-Versus plan is going to work in this case. The NHL needs to start exerting some pressure here and they need to start doing this today.

Three weeks from today, NHL fans around the country are going to be ready to shout "game on". It will be shame if all they have to greet them is a TV screen full of dead air.