Share All sharing options for: Statistical Expectations For Matt Duchene 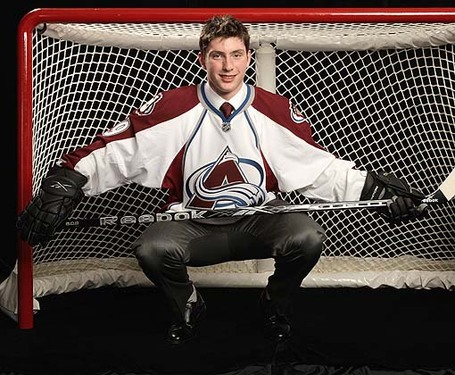 With the Avalanche rookies hitting the ice in just 6 days (yowzers!), I thought it might be a good time to take a look at what we might expect from Matt Duchene if he ends up making the team. I pointed my browser towards my favorite research sites, hockey-reference and hockeydb and went to work. For this exercise, I was interested in the 2nd forward picked (as Duchene was) in each draft. I didn't have any logical start date, so, in an effort to make myself feel really, really old, I went back as far as 1991 - the year Doogie was born. *Sigh*

I was interested in a couple of different things. To start with, I wanted to see what each player did in their rookie (not necessarily their first) year. Two players, Nikita Filatov (2008) and Alex Volchkov (1996) have played so little (11 games total) that I didn't bother with their numbers.

I think most of the data is self-explanatory. "Ov" is where the player was drafted. "Age" is the age (per hockey-reference) from that season (so Duchene, if he plays, would be 19 in this case). TOI information only goes back to 1998.

Interestingly, only two players on this list - Volchkov and Jason Bonsignore - are legitimate busts, although a few others may not have panned out quite as expected. Over this time period, the "average" rookie season from the 2nd overall forward was: 65 GP 16G 20A 37P or .55 PPG. 9 of the 16 players were playing in their rookie season by their 19th birthday. Incidentally, the 1st forward taken over this same time period average .65 PPG in their rookie season, or about 16 points more over 82 games. I was surprised by that disparity, although that list includes stellar rookie seasons from Sydney Crosby, Alex Ovechkin and that dickhead, Lindros.

Not everyone follows the same development path to the NHL though. There are a couple of European players and collegians on the list, so I stripped them out and focused on the 11 players drafted from juniors - Ryan, Horton, Upshall, Spezza, Legwand, Langkow, Bonsignore, Gratton, Stillman and Falloon. The rookie numbers for the bunch really weren't all that different:  63GP 14G 18A 33P .51 PPG.

We can still break things down even further. Some players jumped from juniors to the NHL right after being drafted, while others spent a year in juniors (and Bobby Ryan spent two). Here's your PPG at a glance for players who jumped directly to the NHL:

Fallloon, by the way, is odd in that his first NHL season was also his best NHL season; everyone else generally improved over time, many peaking around their 6th season or so. As for guys who went back to juniors for a year, here's their rookie PPG:

Granted, this is an extremely small sample size, but the argument can be made here that the statistical output of the rookie season for these high draftees wasn't enhanced by an extra season in juniors. The 4 who made the leap averaged .53 points a game. The 6 who didn't? .43 PPG.

I plan to look at career trajectories for these players in a future story, but in case you are wondering whether making the early jump from juniors has a negative impact down the road, it's worth noting that the career PPG for the two groups above is identical - .61 PPG.

Again, I that this isn't the deepest statistical study out there. However, I was surprised to find that the rookie numbers for high draft picks like Duchene didn't seem to be impacted by an extra year in juniors. Whether Duchene makes his full-season debut this year or next, his benchmark should be about 40 points (assuming he plays around 80 games). Anything more would be an excellent rookie season. Anything less and I'm going to have to start reading up on that Bosnignore fellow...