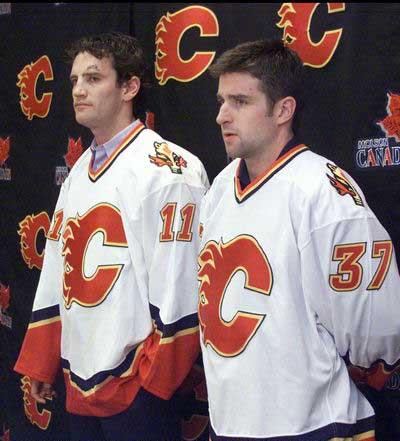 October 1st, 2002. It's a trade that is still regarded with some bitterness. On this day, Avalanche GM Pierre Lacroix traded forwards Chris Drury and Stephane Yelle to Calgary for Derek Morris, Jeff Schantz and Dean McAmmond. While it was supposed to be a big splash for both teams, it didn't really work out for either club. Morris had a solid 48-point season in 2002 but was moved at the deadline the following season for (and this is hard to type) Ossi Vaanaanen, Chris Gratton and a 2nd round pick. By that point, Schantz was out of the NHL, McAmmond had been traded back to Calgary and Drury was playing in Buffalo. Just 17 months after the deal, Stephane Yelle was the only player still on the same team.

Those of you with access to a calendar might note that this entry is, in fact, a day early. That would be because I didn't want anything to take away from Joe's day tomorrow.