Share All sharing options for: Meet the Rookies: Matt Duchene 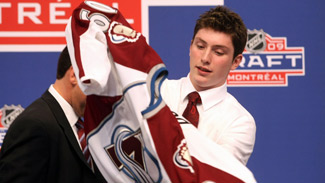 5'11" 200 lbs, Center, Age: 18
I'm guessing you've heard of this guy already. Duchene was drafted by the Avalanche with the 3rd overall pick after he put up 79 points in 57 games for the Brampton Battallion (which was just 3rd best on the team). Duchene grew up an Avalanche fan and was caught giving a little fist pump when he wasn't drafted first overall this summer (meaning he was getting drafted by the Avs). Off the ice, he seems incredibly poised and polished for an 18-year old. On the ice? Oooh boy!
Duchene has been compared to Steve Yzerman and Joe Sakic. Yeah, I'll take that. Hockey's Future had these fine words to say about him:

A complete player, along the lines of a Steve Yzerman.  Duchene has impressive speed and checking ability, and this year he showed that he has outstanding hands and can come through the clutch.   Duchene has solid, but not outstanding, size at 5'11, but it's his ability to play positionally sound hockey complemented by excellent speed that makes him an all-around threat on the ice.

Whomever you compare him to, he projects to be one hell of a player. The Avalanche have had some pretty good young players over the years, but we haven't had a prospect with this kind of skill level since the days of Forsberg and Sakic. Is he that good? I don't know, but I sure in hell hope so. He reportedly looked solid in development camp earlier this summer and, without question, all eyes will be on him this week.

Outlook: Call him Doogie. Call him the Boy Wonder. Call him whatever the hell you want...as long you call him a member of the Colorado Avalanche. Duchene will have every opportunity to make the team this fall and I think only a disastrous camp will prevent him from doing so. If he doesn't make the team, he'll be back in Brampton for the entire season; he's too young for the AHL so it's either the NHL or juniors for Duchene. I'd bet on the former.