Share All sharing options for: Meet The Rookies: Brandon Yip 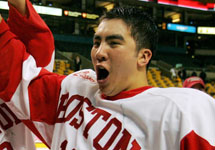 Brandon Yip was drafted in the 8th round of the 2004 NHL draft. He played all four years at Boston University, including this past NCAA championship season. Yip signed with the Avalanche on July 22nd and is an intriguing prospect.

Yip has offensive ability, averaging .78 points per game in his college career and HF notes both his accurate shot and his intelligence. The question marks would seem to be his size and strength, although he has gained some weight and is listed by BU at 197 lbs. Yip had an interesting career at BU, as he battled back from injuries in his sophomore year as well as a suspension during his junior year for violation of team rules. There also were some whispers of a less-than-stellar work ethic. Yip had a solid senior years and appears to be better for the adversity (here's an excellent article on his BU career).

Outlook: I don't really know what to make of Yip. I've seen him projected everywhere from the 2nd line to the 4th line, and that's assuming he makes the NHL. With Hejduk, Jones, Svatos, Stewart and Tucker ahead of him on the RW depth chart, he's probably going to spend the bulk of his season in Lake Erie this year. But, with 3 of those guys due to become unrestricted free agents next summer, there may be better opportunities for Yip down the road.