Share All sharing options for: Meet The Rookies: T.J. Galiardi 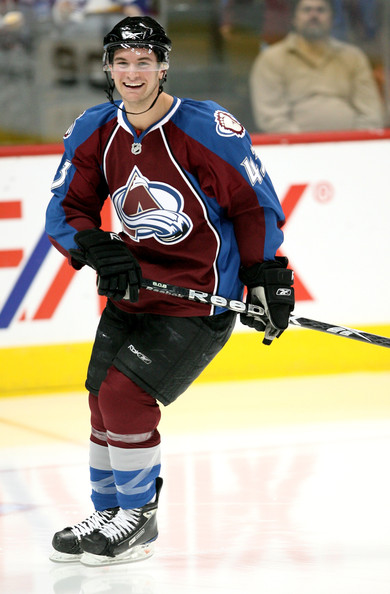 6'2" 190 lbs, Left Wing, Age 21
T.J. Galiardi is not unknown to Avalanche fans, having played surprisingly well in 11 games this spring. T.J. is yet another 2nd rounder (4 forwards attending rookie camp this year were 2nd-round picks), having been taken in the 2007 draft. T.J. spent a year at Dartmouth (where he was a teammate of David Jones), but left after his freshman year due to academic reasons. In 2007-2008, he played with the Calgary Hitmen of the WHL where he scored 70 points in 72 games. He signed with the Avalanche in April of 2008 and spent most of last season in Lake Erie where he put up a so-so 27 points in 66 games. But he looked good in his late-season call-up with the Avalanche, with lots of offensive creativity.
Outlook: Again, there's not a whole lot of roster space this fall, but one area the Avalanche will have an opening is at left wing. Galiardi, who is now wearing Tyler Arnason's #39, will have a shot. If he doesn't make the team, he'll be in Lake Erie and will be one of a few with a chance for an injury call-up.