Share All sharing options for: Meet The Rookies: Justin Mercier 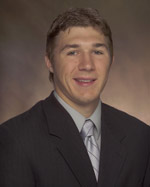 5'11" 190 lbs, Center, Age 22
Justin Mercier is a 2005 6th round pick who signed with the Avalanche this summer after four years at Miami (Ohio) University. Mercier scored 104 points over his 157-game college career (.66 per game) and was on the team that lost to BU in the NCAA championship this spring. Hockey's Future describes him as:

An almost frantic competitor on the ice, Mercier is most noted for his strong two-way play and willingness to be physical despite being smaller (5’11, 190 lbs). Never taking a shift off, he works extremely hard around the net, on the forecheck and in the defensive zone, skills that will serve him well as he adjusts to the professional game.

Mercier has filled out a bit since being drafted (his RedHawk bio lists him as 6'0", 198) and sounds like a potential 3rd or 4th liner to me.
Outlook: Mercier is probably headed to the AHL this spring as there's a bunch of people ahead of him on the depth chart currently.