Share All sharing options for: Meet the Rookies: Cameron Gaunce 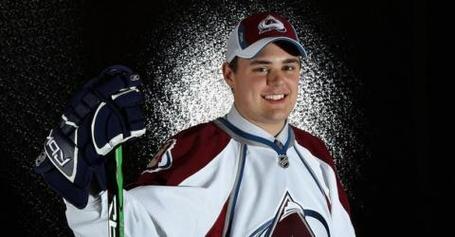 This may be hard to believe, but Cameron Gaunce is a defenseman with good offensive upside. He's average .8 points per game in two seasons with Mississauga St. Michaels of the OHL (Peter Budaj's former team). The Avalanche took Gaunce in the 2nd round of the 2008 draft and signed him to an entry-level contract this year. Gaunce isn't huge, but he's bigger than many Avalanche blueliners, veterans included. And he apparently has better defensive acumen at this point than many of his fellow prospects on the blueline.

Outlook: Gaunce will return to the OHL this year, but should be in the mix next fall.