Share All sharing options for: Game 48 Preview: Devils at Avalanche 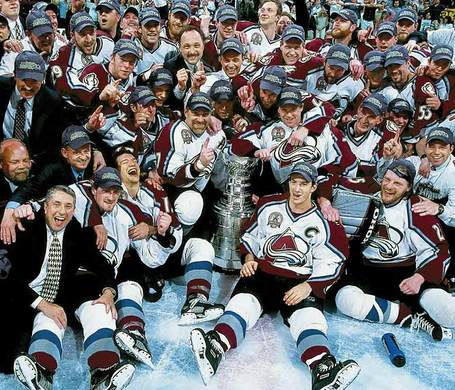 Yeah, I know. That was a long time ago - almost 9 years?!? The teams are completely different;  there are, I believe, just 6 players from those Finals on one of the two rosters tonight (Foote, Hejduk, Brodeur, Elias, Pandolfo, White). It doesn't matter to me, and it shouldn't to you. The 2001 Finals - particularly Game 7 - is my favorite sport's moment of all time, and I don't think it will ever be topped. And I bet a sizeable percentage of you share that same feeling.

So, I could write about how good the Devils are and how Martin Brodeur is still one of the best goalies in the world at age 37. I could write how the Avs have been off all week or how they managed to move into first earlier in the week by being idle or how the Svatos trade rumors are starting or how the Avs are trying to win 3 in a row, something they haven't done since the 13th game.

I could talk about how Nic Bergfors are neck and neck in the rookie scoring race or how the Devils have the best road record in the NHL or how Claude Lemieux is going to be honored before the game.

But that's not where my head will be at this afternoon (3pm eastern start time).

In Lou We Trust