If you were General Sherman, what would you do with your 2010 Avalanche roster come the March 3rd Trade Deadline?

March 3rd is closer than it sounds. The Olympics run from Feb 12- Feb 28. So really, besides the 3 days between when the Olympics end and the trade deadline hits, there are only about 3 weeks of NHL play for the AVS' brass to do some buying or selling. Thankfully, the AVS look more like buyers rather than sellers like everyone presumed. As 3/3/10 approaches we'll have more trade coverage, but it's never to early to make unfounded predictions and spawn some conjectural chatter.

More than anything, I'm curious to see what you fans think/want for your beloved Avalanche. The BIG QUESTION is: Should the AVS tempt fate by screwing with the great chemistry the team currently enjoys? With the team as young as it is, I think chemistry will play a HUGE role down the road to the post season, so I'm hesitant to suggest any trades (Tucker and Clark excluded of course).

Let's take a gander at some possible moves for the Avalanche by position.

First let's identify what the AVS need: a top six forward who can play on the wing (no offense to Galiardi, Yip, or Hejduk and Jones' bum knees).

Budaj: Much to some fan's chagrin, and other fan's wildest dreams, it is likely that Peter Budaj could be moved. He will be an unrestricted free agent (UFA) this summer, and while he would be a value (CostCo wholesale style) re-signing as a back up, there are teams that would be very interested in his services and potential. And I'm willing to bet Budaj wants another shot as a #1 somewhere. With Mr. Anderson firmly entrenched between the Colorado pipes, it is unlikely Boods will get another shot in Denver. Also, with Anderson playing 82 games next season, who needs a back up anyway? Maybe the AVS front office will just get rid of the position all together.

So what does Shemran trade Budaj for? What is nice guy Budaj's market value? Maybe another back up? Could we get a decent forward and give Tyler Weiman from lake Erie a chance as the new back up? He's 15-12-3-2 with a 2.34 GAA and .917 Save % for the Monsters this year, and he has been called up before by the AVS. In his 16 minutes of NHL playing time Tyler (No relation to Arnason, thank God) made 10 saves and allowed 0 goals. I believe in Peter Budaj, but I also wouldn't be adverse to seeing him traded for a player of equal value (a forward) and giving Weiman a shot in net on the bench. If Budaj is gonna leave this summer via free agency anyway, it's better we get something for him now. I really have no idea how this one may pan out.

Fun Fact: Raycroft and Theodore are both free agents this summer. Bust out your piggy bank! 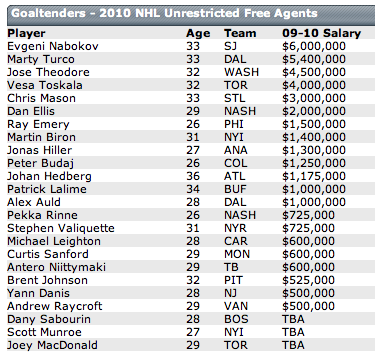 There are more likely possibilities for trades with the Avalanche D than any other position. Clark, Salei, and Foote are all Unrestricted Free Agents this summer. Quincey and Peltier are Restricted Free Agents (RFA). Cumiskey, Hannan, Preissing (overpaid and in the minors), and Wilson are signed for one more year. Male Model is the only current defenseman signed beyond next year (2 more years).

So what's General Sherman's move this March? I think nobody would miss Clark. Luckily his value has actually increased this season from his bottom of the barrel market value last season, and no doubt somebody out there is dumb enough to think his blocked shots stat actually translates into a viable skill (whoever that would-be buyer may be, I also have a bridge I'd like to talk to them about.....). Clark would seem to be the obvious choice for a trade. At the very least, he'll leave this summer via free agency, freeing up 3.5 million for a shiny new pylon.

Captain Footer is not going anywhere except maybe retirement. Hannan and Quincey have proven their worth and will stay - although Quincey is going to demand more $ to stay in Denver. Cumiskey is so fast they won't be able to catch him in a trade.

The Avalanche have a good deal of young D talent coming up through the pipeline (See: Kevin Shattenkirk, Colby Cohen, Tyson Barrie, Stefan Elliot and Cameron Gaunce). So do any of these youngsters get a shot next year or do we just replace our old blueliners in some trades? There are always rumors about Liles, but I think he'll hang around one more year while the youngsters continue to develop and then we'll trade him next year when it makes more sense (i.e., he has more value) and a young guy can step in.

Top 40 Unrestricted Free Agents List: You know what sucks about this list? It reminds me how overpaid Clark is. 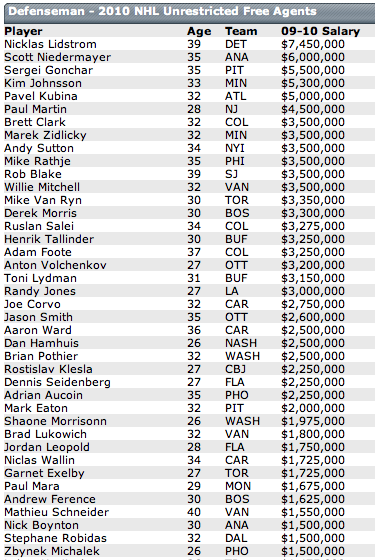 It's hard to imagine the AVS trading any forward who is currently signed next year or beyond, unless it's to sweeten some other deal. The names listed above though are a different matter. Are any of them safe? I think the restricted free agents will be alright (Wolski, Stewart and Yip are must haves), but the only UFAs who SHOULD be back are Hendricks and Durno. I really, really want to see Haydar have a shot, but I guess he's been delegated to the AHL for time and all eternity.

Svats is most likely gone. He's been given every opportunity in the Mile High City, but at this point a change of scenery may be the best thing for him and the AVS. He's often been compared to Maxim Afinogenov and as this season shows, a change of scenery can help - Maxim has flourished in HotLanta. I hope Svatos can return to his 30-goal days, but I don't see it happening for him in burgundy and blue.

Tucker? Pack your bags. Whether its the trade deadline or the Free Agency summer, he's headed elsewhere [insert smile, and joke].

So what should the AVS do? The only way we're going to trade for somebody decent (top 6 forward) is to make some sort of package deal. Do we go for draft picks or proven NHL talent? Let's discuss it and then we'll send Greg Sherman a letter. In the meantime, here's a couple charts of Forwards who will be UFAs (some of these dudes have already re-signed with their teams, like Hejduk). 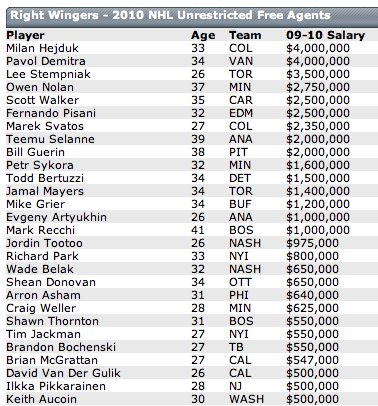 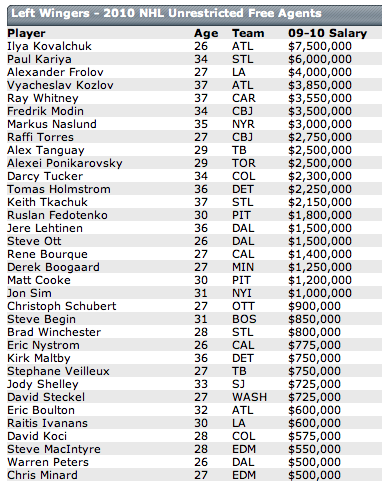 Alex Tanguay anyone?? How about Kovalchuk!!! 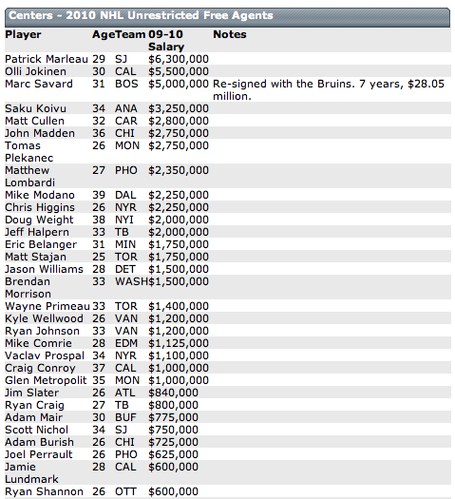 I really like the make up of the Avalanche right now. I'm not sure any of the upcoming unrestricted free agents on the team necesitate a trade. The AVS could let them all walk in free agency this summer and do all their shopping then.

So YOU are the GM. What would you do?