After having 7 fights in the last 3 games I think it was made clear to everyone that the Avs are a fighting team. They're actually 6th in the league in fighting majors with team fight leader Cody McLeod (12) 10th as far as individual fights leaders. The question is, has this contributed to their stunning success? Well, in the top ten teams with the most fights there are the Avalanche, the Sharks, the Flames and the Canucks who're are playoff teams but there are also the Ducks, the Flyers, the Lightning, the Blues, the Oilers and the Maple Leafs who are not. Whereas in the bottom ten, the Wild, the Hurricanes and the Red Wings are not in the playoffs while the Devils, the Black Hawks, the Sabres, the Capitals, the Islanders, the Coyotes and the Predators are in. So it's hard to say that fighting hurts or helps based on a fights to points ratio though not fighting probably has the edge (interestingly enough, all the East's divisional leaders (Devils, Sabres, Capitals)  are in the bottom 10 while 2 of the West's (Sharks, Avalanche) are in the top 10). However, it seems that fighting is helping the Avalanche. After all, they are on a four game winning streak and have had seven fights in that time. So what's the secret?

First let's look at who they have fighting for them. I think that this Avalanche team has an almost perfect line up of fighters.To my mind there are four types of fighters in hockey and the Avs are one of the rare teams that have all four. 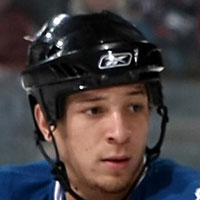 This is the rarest of the fighters. This player has to be good enough to be a top six forward but also be willing and able to drop the gloves and go toe to toe with guys who are only in the NHL because they know how to fight. This player is an excellent type of player to have. When you see a guy who has the talent level Chris Stewart or Jerome Iginla drop the gloves for the team, it's gotta be motivational. It's not an easy role to have either, because they have to know when to when to fight beyond just standing up for a teammate or trying to shift the momentum of the game. Nobody cares if David Koci is spends half the game in the box but every second that Stewart is in the box is a second that one of the Av's major scoring threats is off the ice. It's a pretty delicate balance and Iginla is the only current player I can think of that is a master of this. Stewart seems to be getting the hang of it as well. There was a time that Stewart seemed to be fighting to try and prove that he belonged on the team. He has proven it by stepping up and becoming a top six forward when the Avs desperatly needed one. Now he can focus on fighting for the team and not for himself.

Another great player to have. This player lays down hard checks and is willing to fight if an opponent takes exception to it. An important characteristic of these players is that they would be in the NHL with or without fighting. I'm not talking about Eric Godard or Brian McGrattan here. The Avs are lucky enough to have two of these types in Ryan Wilson and Adam Foote. I concentrate on Wilson because he is the fighter of the future. Nothing illistrates the type of player Wilson is better than the recent Devil's game. He hit Patrick Elias with a clean, hard check and knocked him out of the game. The Devil's had to respond and Wilson was willing to answer the bell. Whether through a big check, a big fight or a big goal, these types of players are invaluable to their team. 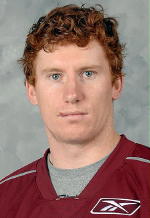 A familiar type of player to most of us. This a player is not the best player to have ever laced up a pair of skates and they are usually found on the third or fourth line. They can chip in with a goal here and there, some more than others. The distiguishing characteristic of these playersm however, is that they play their hearts out every night. They will do anything to win and anything for the team. Some are good guys (Ian Laperriere) and some are bad guys (Daniel Carcillo) but they are usually fan favorites because they come every night to play. Cody McLeod and Matt Hendricks fall into this category for the Avalanche. They can score big goals (McLeod's two agaist the Wings come to mind) but mostly they are there to motivate the bigger guns with a hard forecheck, a big fight or by pissing off the opponent's goaltender.

The type of player most associated with fighting. This is because with the other types, fighting is an aspect of their game. With enforcers, fighting is their game. Enforcers are players who are only in the NHL because of they're ability to fight. They can't score, they aren't that good defensively, hell, some of them can't even lay a good, clean body check. They are all about momenum shifting fights. Supposedly they are about protecting star players too but they're really no good for that since none of them have the talent to play on a line with top talent. Players like Sean Avery and Steve Ott are going to fuck with other teams' talent, enforcer or no. David Koci is the Avs' resident enforcer. He has earned a lot of the fan's good will with these last few games. Personally, I think he is redundant to a team with Stewart, McLeod, Hendricks, Foote and Wilson.

This is because what I am trying to prove with all of this is that in the modern NHL fighting is ALL about momentum. It is not about protecting players. It doesn't work. A player might step in to fight an opponent that took a shot at him or a teammate but is this not going to stop such behavior. Sean Avery will run Miika Kiprusoff as often as he runs Ryan Miller. And fighting isn't about being physical and tough to play against. Only the Ducks are in both the top ten in fights and the top ten in hits. Colorado is 26th overall in hits. What it is about is motivation and momentum. The Avs are better when they're fighting because it gets the team fired up. Some teams don't need fights to get them motivated. The Sabres get to watch Ryan Miller stand on his head all night. The Black Hawks have Marian Hossa, Patrick Kane and a host of other offensive wizards to fire them up. Right now, the Avalanche have a pretty good line up of fighters and I say, use them.