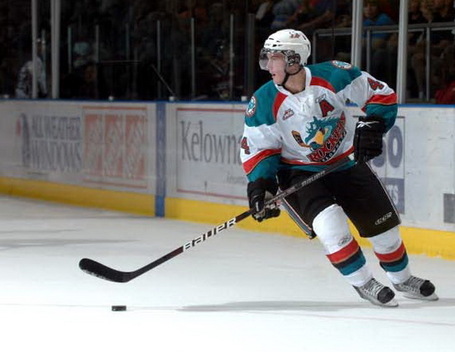 The June draft of 2009 will be memorable for the Colorado Avalanche with the early emergence of Matt Duchene and Ryan O'Reilly.  In addition to the two Ontario born forwards, the Avs also selected two defenseman from the Western Hockey League (WHL).  Tyson Barrie, who is the second highest scoring defenseman in the WHL (50 points in 41 games as of this posting), was selected by Colorado 64th overall.  Mile High Hockey had an opportunity to talk with the Kelowna Rockets defenseman about his current success and future prospects.

Barrie:  "I don't think we have been meeting our expectations here.  Lately we have had big problems with injuries.  You can't make excuses, but I think we are going to get better from here on out."

MHH:  If you (Kelowna) get into the playoffs, do you think you can do any damage?

Barrie:  "Yeah, I think the west is pretty wide open here.  We are not too far behind the teams ahead of us.  So we are going to try to catch them and go into the playoffs and the higher we play the better.  I think once you get into the playoffs it's a whole new season, so anything can happen right?"

MHH:  What do you think is the difference between this year and last year in terms of your personal success?

Barrie:  "I took on more of a leadership role this year and you know we had a lot of players move on last year from that team.  This year I have kind of been the guy on the back end.  So, you know just the added responsibility and knowing that I have to play good every night I think that has contributed a lot to my success this season."

MHH:  Did you learn a lot playing with the likes of Luke Schenn and Tyler Myers in past seasons?

Barrie:  "I think I learned a ton from those guys and they are obviously great players and have both moved on now to the NHL.  I still keep in touch with them and I am still learning from them.  It's a lot different this year, but I am enjoying it too and trying to be that type of guy now, be a leader, like they were for me."

MHH:  Did you have a favorite NHL player growing up?

Barrie:  "I used to like Rob Blake a lot and Scott Niedermayer.  These are two guys that I kind of looked up to."

MHH:  Is there someone in the NHL, such as Niedermayer, in which you have tried to pattern your game after?

Barrie:  "I don't know, it would be tough to pattern your game after him, nobody quite skates like he does.  There are a lot of guys that are coming up now and younger guys in the NHL that I look to for some guidance.  I think guys like Mike Green, Kris Letang, and those guys that are more offensive.  They are smaller, but skate well and move the puck; I think guys like that is what I try to model my game after."

MHH:  How would you compare yourself to former Kelowna Rocket and current Colorado Avalanche defenseman Kyle Cumiskey?

Barrie:  "Obviously he is a tremendous skater; probably a better skater then I am, but something I can work on.  I think he is a very talented player; he's good offensively from the back end.  So that's something I would be looking to bring to the team."

MHH:  Looking back at the June 2009 draft, did you have much contact with the Avalanche prior to the draft?

Barrie:  "I went to the scouting combine and had a meeting with them there and I thought that went well.  It was pretty relaxed.  I hadn't had contact with any teams prior to the draft.  It was kind of wide open for me and I was lucky enough to go to Colorado."

MHH:  Did you think you would go higher in the draft or did you go about where you had expected?

Barrie:  "I wasn't disappointed at all.  I knew where I was kind of slated to go.  I was anywhere from second to third round, around there.  I was happy with it.  I think that I had worked hard last year and it paid off and I'm going to try and show that I am better then where I was picked."

MHH:  How was your first training camp experience with the Avalanche?

Barrie:  "Oh, it was fun.  It was kind of a bit overwhelming when stepping on the ice with guys that you watched play growing up.  Everyone is present, but it is pretty wild once you are out there with guys like Hejduk and Stastny and stuff.  So it was a really good experience for me and I look forward to coming and having a good camp next year and showing that I deserve to be there."

MHH:  Have the Avalanche kept in contact with you since the end of training camp?

Barrie:  "I don't know their thought process, but I imagine just to play and not worry about that stuff too much.  I have been in contact with Dave Oliver, who came out and watched a few games and I talked to him afterwards and just give you feedback on what you can do a little better.  It's been mostly positive feedback."

MHH:  Do you keep in contact with any other Avalanche prospects, such as Stefan Elliott?

Barrie:  "Me and Stefan played minor hockey growing up against each other and playing against each other in the Dub.  We have been good friends for a while now.  So I keep in touch with him all the time.  It's good to see Matt Duchene and O'Reilly at camp there.  I hung out with them and it's good to see them have such good years.  It makes it easier going into camp when you have guys to hang out with and guys you know."

MHH:  How far away do you think you are from the pro level?

Barrie:  "I think it depends on how hard I work.  I think if I have a good summer this summer and there is no reason that...I have a lot of work to do.  I have lots of things to work on, but I would like to be there next year, if not the year after.   I think within the next few years hopefully with a lot of hard work and a good offseason that I get strong and faster that I could be right there."

MHH:  After the season you are having, do you think you have opened eyes over at Hockey Canada regarding the 2011 Canadian U-20 team?

Barrie:  "I think that it was tough for me, I never played in the U-18 and never got the invite to that camp.  So I guess I was a bit off the radar for them a little bit and hopefully this year I have opened some eyes and shown I can play with the best players.  Hopefully next year I'll be fortunate enough to get a shot at it and just go and have another good year."