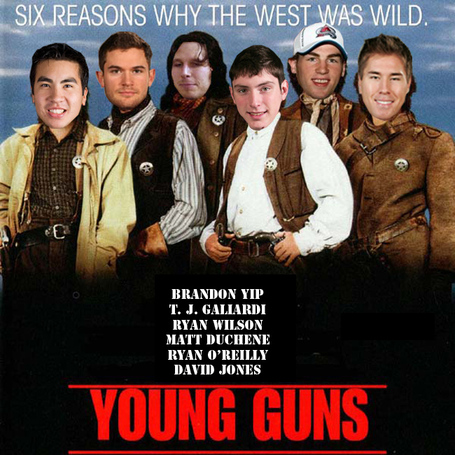 There were about 16 billion question marks concerning the Avalanche going into this season, but the biggest enigmas seemed to be goaltending, novice coaches, and a plentiful crop of youngsters. By now the whole wide hockey world has sung the praises of Mr. Anderson, and rightly so (story coming soon via Derek). But what about the other big question marks: the bunch of brash brats banging on the NHL door (alliteration = 6,000 points), and the other pack of AV newbies: the coaching staff?

These 3 big question marks have become the answers to why the AVS are sitting pretty at #1 in the NW.

This will be a two-part story. This is Part one: Young Guns. (Part Two: Coaches!: The Musical coming soon....). And yes, I'm horrible at photoshop - although Galiardi looks pretty good up there.

The biggest key to the Avalanche's success this season has been the remarkable play of their young guns. Nobody saw it coming. Their energy, speed, versatility, commitment to both ends of the ice, ability to unselfishly fit into specific roles, and their all around skill level, have propelled the Avalanche in the standings and turned the team game into a hard fore-checking, quick transitioning, ball of energy and awesomeness. Breakdown and Calder Trophy analysis after the jump, bullet point style:

The Kids Are Alright

So what all this translates into is a bunch of young guys having a blast with their friends. The team is a close-knit group, and those off-ice relationships translate into sweet chemistry on the ice. Credit the coaching staff, but these young kids - who were supposed to be a WEAKNESS to the team this season - have really bought into the system and into each other. They work hard every night, and that work ethic makes up for their inexperience.

Rookie of the Year Watch

If the season had ended at the mid-point Matt Duchene would most likely NOT have had a shot for the Calder Trophy, but luckily for Dutchie the season is 82 games. Right now, Duchene leads all rookies in scoring with 34 points (2 ahead of Tavares), and probably holds a slight edge over both Tavares and the Saber's stand out first year defensman Tyler Myers in terms of Calder voting. Simeon Varlamov, James Van Reimsdyk, and Niclas Bergfors are certainly in contention as well. Varlamov would probably have stole rookie of the year hands down if not for injury. Here are his numbers pre-injury: 12-1-2 (yikes) Save% .924 GAA 2.21 and 2 shutouts.

Barring any offensive eruption (keep it clean gentleman) by anybody else, it'll most likely come down to Tavares, Myers, and Duchene for rookie of the year. I have to give a slight edge to Duchene because he took 22 games to get going and has been on a pretty decent tear ever since, so if he continues on that pace he'll be in good shape. But if Varlamov returns with the same kind of WOW that he had at the beginning of the year, then all bets are off. I really think Myers may be the dark horse. I'd rather he win over Tavares at any rate (aside: why does it seem many AVS fans have an undisclosed distaste for Tavares? I hear whispers of it from the boards, but no one ever comes out and says it...).