Monsters Climbing Up the Standings

Share All sharing options for: Monsters Climbing Up the Standings 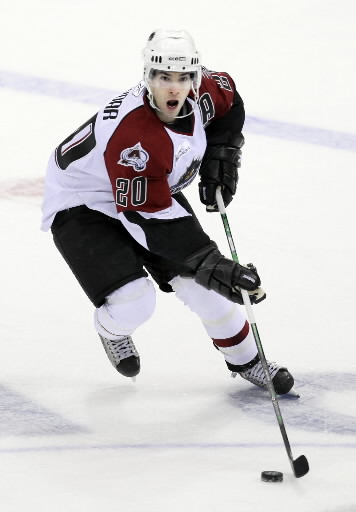 On December 13, 2009, the Lake Erie Monsters had a record of 8-16-0-3.  It looked as if it would be another long season for the Cleveland, OH affiliate.  Yet, thanks to the formation of a potent line, the Monsters have taken off and have opened some eyes around the American Hockey League (AHL).  The Monsters have fashioned a record of 21-21-0-4 (as of January 27, 2010).  Now with health, luck and consistent play, the team has a legitimate chance for their first playoff appearance.  With 34 games remaining, the Monsters are three points out of fourth place in the North Division (with a game in hand).

It has been two months since TJ Hensick was reassigned to the Lake Erie Monsters.  After a rough couple of games, Hensick has been one of the hottest players in the AHL.  Recently, he was named AHL Player of the Month for December and represented the Lake Erie Monsters in the AHL All-Star Game (replacing an injured Darren Haydar).  Hensick had a goal and an assist in a 10-9 shoot-out loss for Planet USA to Canada.

The decision by head coach David Quinn to put the maligned Hensick with an inconsistent Ryan Stoa and a dynamic Darren Haydar (above) has turned out to be a gem.  The line was put together during a 3-0 loss to the Hamilton Bulldogs in late November.  In 15 games as a line (Stoa played in 13), Haydar recorded 10 goals and 11 assists.  Hensick had four tallies and 19 helpers.  Stoa, who had four goals in his first 19 games as a pro, had nine during this stretch.

Hensick and Stoa have not slowed down without the injured Haydar.  Since Haydar's injury on January 2nd, Stoa recorded five goals in eight games.  Hensick registered 35 points in 26 games since his demotion; currently tied with Haydar for the team lead.  Injuries in Colorado have given Stoa a second opportunity with the Avalanche.  Expected to be a dark horse candidate to make the club out of training camp, he didn't do enough to impress the Colorado brass and started the season in Cleveland. Stoa isn't the most fleet of foot left winger, but paired with a talented and quick centerman, he becomes a valuable asset.  Stoa has one assist in four games played with the Avalanche since his recall.

While Tyler Weiman is cemented as the number one goaltender, it looks as if the backup position has been won by Billy Sauer.  Trevor Cann struggled and has since been reassigned to the Central Hockey League's Tulsa Oilers.  Billy Sauer who has spent time in the ECHL with Charlotte and Toledo did enough in his brief stint to beat out Cann.

While Darren Haydar has missed time the last few weeks due to an ankle injury, the Monsters are also suffering from some other bumps and bruises.  Tom Fritsche is currently out of the lineup due to a concussion.  It's been another tough year for Fritsche as he has only played in 27 games and has just nine assists in those games.  Ray Macias and Tom Preissing are out with lower and upper body injuries respectively.

As if injuries were not bad enough, the Monsters are also short-handed due to some recent recalls.  Chris Durno and Ryan Stoa, are currently on recall with the Colorado Avalanche.