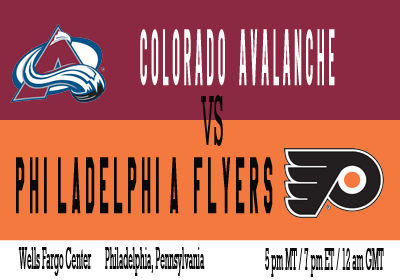 Yes, the tacky graphics are continuing...at least until some kind soul steps in and gives us something better. I have decided I have filled out the old table that we used to use for the last time. That thing was more annoying than...uh, the Philadelphia Flyers.

The Avalanche are in Philadelphia tonight to take on the Flyers. It's the home opener for the Flyers, and they'll be celebrating their Stanley Cup failure by raising their Eastern Conference Championship banner tonight...because first runners up are people too. The Flyers knocked off the Penguins on opening night in Pittsburgh and then lost in overtime on Saturday to the Blues. For Philadelphia, goalie Michael Leighton is injured, which means the team is going with a tandem of Brian Boucher and Sergei Bobrovsky - whom you all remember as backstopping the Novokuznesk Mettalurg in the KHL last year. None of the three have ever beaten the Avs (bad omen, there). In the bad news injury department, beloved former Avalanche Ian Laperriere is out for the year - and possibly his career - due to injury issues. In the good news injury department, Flyer defensemen Chris Pronger is still recovering from douchitis (officially listed as knee surgery) and is listed as questionable for tonight. Frankly, I think he's always been a little questionable. That line is funnier if you picture Groucho Marx delivering it. Or, perhaps not.

The Avalanche are coming off of a big win against the "other" Stanley Cup finalists on Thursday. It was a high-flying affair with both teams displaying lots of speed and not a ton of hitting and it will be interesting to see how the dynamics change against Philadelphia. Peter Mueller and David Koci remain out (Skipper Joe indicated that Koci is still a few weeks away although he has been practicing). Adam Foote (maintenance?) and Kyle Cumiskey (groin) both skipped practice on Saturday but returned to the ice yesterday. Coming off the win on Thursday, it may be unlikely for any big lineup changes, but there could be some minor tweaks (such as Jonas Holos replacing Ryan Wilson or Philippe Dupuis replacing Mark Olver). Craig Anderson is the confirmed starter tonight, and Sacco will then decide whether to go with Anderson or Budaj the next night in Detroit.