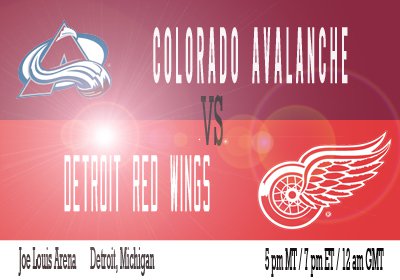 Slew foot, dive or both, the Colorado Avalanche were inconsistent last night and it ultimately cost them a chance at a win (or at least a crummy loser point). Craig Anderson made some brilliant saves but then let in a rough winning goal in the 3rd. John-Michael Liles and Kyle Cumiskey have both been major sparks offensively, but defensively...well, it's been an adventure.  There is nothing inconsistent about the power play, however - it was consistently awful all night long with the Avs finishing up at -2 for 3. Clearly, the Avalanche need to keep Detroit out of the box to have a chance at winning.

The Wings are off to a good start and have treated their first two opponents like an early bird buffet, starting early and not letting up until they've finished gorging on the fresh carcasses of Ducks and Hawks. Or I could have just said they were freaking old and not spent five minutes trying to construct that sentence. At any rate, the Wings have yet to trail in a game and the Avs have yet to score first in a game. Those trends will need to change. Tonight's as good a time as any to do that.