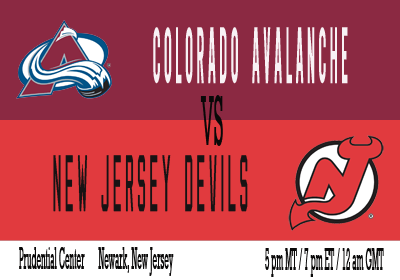 The Colorado Avalanche take on the former Colorado Rockies tonight in New Jersey. The big story for the Devils so far this year has been their trouble with the salary cap. Since the Devils have no cap room, they've been unable to replace injured players and dressed just 15 skaters on Monday and 16 on Wednesday. However, Brian Rolston has recently been Lamiorello'd, being placed on LTIR for "sports hernia" surgery. With that move, the Devils created cap room to sign forward Adam Mair and recall forwards Jacob Josefson and Tim Sestito and defenseman Matthew Corrente.They will need them. Besides Rolston, the Devils will also be without defensemen Marc Fraser and Bryce Salvador and D Anton Volchenkov is questionable with a broken nose

The Avalanche are coming off an emotional win on Tuesday against the Red Wings. All three Avalanche games so far have been close, with 2 going to overtime and the other decided in the final few minutes of regulation. I'm all in favor of keeping the nail-biters going...as long as we continue to be on the winning end of most of them. Not surprisingly, Dater is reporting that the line combos in practice were the same as those used late in the game against Detroit (Hejduk on the first line, Duchene centering Yip and Jones, Radar centering TJ and the Bear). Also not surprising: Craig Anderson will start.

I believe we still need our game thread graphic, so one of you creative types needs to get cracking.

In Lou We Trust