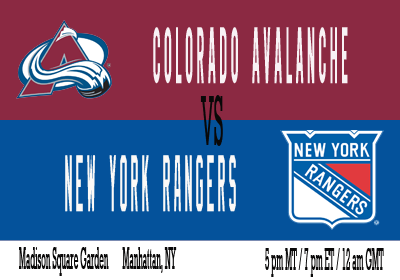 The Avalanche finish off an early-season road trip tonight, taking on the Rangers at Madison Square Garden. Since the Avs are 2-2 on the trip so far, tonight's game will mean the difference between successful or meh.

On paper, this doesn't shape up to be a defensive battle. The Rangers are averaging over 4 goals a game and the Avs are averaging three. Meanwhile, the Avs and Rangers rank 28th and 30th in goals allowed and are giving up 34 and 35 shots a game, respectively. The game isn't played on paper, though, and the Craig Anderson - Henrik Lundqvist match up should be a good one.

The Rangers are missing Vinny Prospal, Marion Gaborik and Chris Drury, which has them a bit thin offensively. Brandon Dubinsky and Sean Avery lead the team in scoring with 4 points each. One interesting tidbit: Ranger's rookie defenseman Michael Sauer is the brother of former Avalanche Kurt Sauer.

But enough about the game. Let's talk about game thread graphics. As you may know, we've accidentally started this thing where we use a user-created pic for the game threads. Since this kind of just happened without any planning, we don't really have a system in place to to pick a photo if more than one are submitted. Currently, I've just been using the first one posted, but should we tweak that? Do I pick my favorite? Or the one with the most recs? Do we need a poll? What else do we have to talk about on a Monday morning?