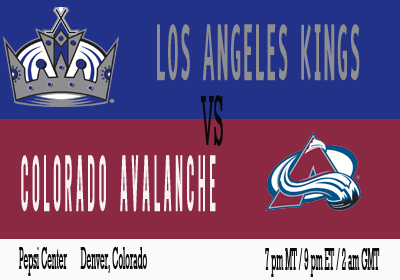 The Avalanche host the Los Angeles Kings tonight in Denver. Both teams will be missing a key defenseman, as Drew Doughty and Adam Foote have both been ruled out for the game. David Jones is expected to play tonight, which, combined with Foote's absence, probably means the Avs will go back to using 6 defensemen (sorry David Liffiton).

One of the teams tonight has been playing abysmally on the powerplay and, amazingly, it's not the Avs. The Kings have converted just 1 of their 22 opportunities so far this year. If you don't recognize that as ironic foreshadowing, you haven't been following this team closely.

The Avalanche and Kings are participating in a Twitter hashtag battle, billed as the first such battle between NHL teams (those Avs are such vanguards of the social media wave, are they not?). Anyway, for each #GoAvs hashtag posted during the game, the Avalanche and Kroenke Sports Charities will make a $1 donation to cancer research. The Avs will donate up to $5,000 so make sure you're doing your part to spend Stan's money.

Jewels From The Crown