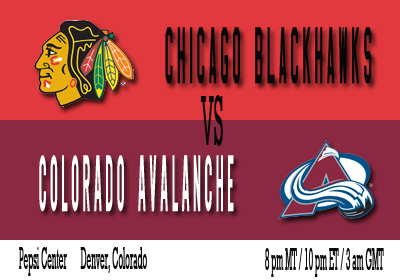 The Avalanche host the Stanley Cup champion Chicago Blackhawks tonight at the Pepsi Center. The Avalanche will be celebrating their 15th season in Denver with a reunion of all the beloved members of the first Cup team (plus Marc Crawford). Blackhawks coach Joel Quenneville is one of those being honored - he was an assistant on that 95-96 team. Coach Q will have another reason to celebrate tonight, as he will be coaching in his 1000th NHL game...hopefully in a losing effort.

The Blackhawks have gone under a lot of changes since they hoisted the Cup, making a ton of changes to get under the salary cap. New to the team are goalie Marty Turco, forwards Jeff Taffe, Fernando Pisani, Ryan Putolny, Bryan Bickell and Viktor Stalberg and hulking defensemen John Scott. Meanwhile, the team lost the following 10 players in the shuffle:

The Avalanche had cap issues of their own this summer, but they were of a different nature. The Avalanche just barely made it over the cap floor and saw 9 players leave via free agency or trade while only adding one: Daniel Winnik.

With Winnik being the one notable acquisition, the 2010 Avalanche will resemble the 2009 Avalanche. 16 of the 24 players on tonight's roster were on the opening night roster last year and only 3 - Winnik, Mark Olver and Jonas Holos - have yet to play a game in an Avalanche uniform.

Winnik is a Toronto native drafted in the 9th round (265th overall) of the 2004 draft of the Phoenix Coyotes. He played 3 years at UNH and one in the AHL before breaking in with the Coyotes in 2007-2008. The 6'1", 201-pound forward has 52 points in 202 career games so he may not be a scoring threat, but so far this preseason he has shown a willingness to do all the non-sexy things needed to do to help the team.

Olver is a Burnaby, British Columbia native - Joe Sakic's hometown. The diminutive winger was taken in the 5th round of the 2008 draft. After 3 successful years at Northern Michigan University, Olver signed with the Avalanche in the spring; he wasn't expected to make the team but had a strong preseason, tying for the team lead in assists and shots taken.

Holos is another product of the 2008 draft and he and Olver are the first two '08 draftees to make the NHL. Holos is from Norway and will become just the 6th Norwegian to play in the NHL. None of the other 5 Norwegians have a positive +/-, so lets hope that Holos can reverse a trend there.

It doesn't look like Olver will make it into the lineup tonight, according to the lines reported by Adrian Dater. It looks like Holos will be in the lineup over Ryan Wilson, but it's possible that will change.

If you are new to Mile High Hockey, welcome! We usually have these previews up first thing in the AM (a little late today drawing the gaudy graphic above in MS Paint). An hour before game time, we post a live game thread which is something you kind of need to experience in person - picture a bunch of sarcastic unicorns discussing minigolf while gorging on delicious Arby's sandwiches and you'll sort of have the idea.. But don't be alarmed, we're really quite harmless. Finally, after every game we post a recap to either add insight to the game you just watched or fill you in on what you missed.  And don't forget to follow us on Facebook and Twitter; we're told all the cool kids are doing it.