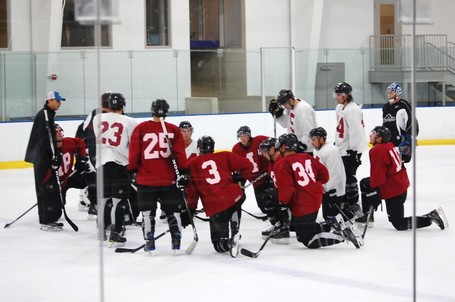 The ice has been put in place at Quicken Loans Arena in Cleveland, OH.  It means it’s time for the Lake Erie Monsters to hit the ice for their fourth season.  This could potentially be the last season in which the Monsters are affiliated with the Colorado Avalanche, but that is a story for a later time.  While the parent club saw few changes to their roster, the Monsters will have a fresh look, especially on the blue line.

The goal for the Monsters this season will be to earn their first postseason birth.  It will be up to second year coach David Quinn to improve the sixth place finish, from last season, in the North Division and 34-37-1-8 record.  Not to mention, improve on a power play ranked 12th in the league (18.4 percent) and most especially a penalty kill that was dead last at 79.5 percent.

The Monsters will have a new look between the pipes this season.  After spending the last three years with the Monsters, former 2002 draft pick Tyler Weiman, moved on and signed a free agent contract with the Vancouver Canucks.  Back this year with the Lake Erie Monsters is Jason Bacashihua.  The man called "Cash" spent the 2009-10 season with the Hershey Bears (AHL).  He had an impressive 17-3-1 record, with a goals against average of 2.48 and save percentage of 0.911.

The Monsters will also be relying upon veteran netminder, John Grahame, to help fill the Weiman void.  Grahame had a brief stint with the Monsters at the end of the 2009-10 season.  He struggled, winning only four of his 14 starts.  Joining Grahame and Bacashihua in camp is youngster Trevor Cann.  Cann is entering his second professional season for the Colorado organization and is coming off a year in which he spent time with both the Monsters and the Tulsa Oilers (CHL).

Quinn may opt to go with more experience in net, meaning Cann could start the season with Tulsa.  While Weiman’s 21-16-1-3, 2.48 goals against average, and 0.912 save percentage may not look like much, he was often Lake Erie’s best player in the games he started.  Replacing Weiman will not be easy and it will take more then just solid goaltending from Bacashihua and Grahame.  The Monsters will need help from their new young defense.

While there will be a big change in goal for the Monsters this year, the biggest change may come on the blue line.  Gone are the likes of Derek Peltier, Wes O’Neill, Tom Preissing, Brett Skinner, and Brian Fahey.  The remaining defenders in Ray Macias, Kevin Montgomery and Travis Gawryletz (AHL contract) will be joined by an exciting crop of new young defenders.

That group features draft picks from the 2007 and 2008 drafts.  The most high profile of these players are the Boston University pairing of Kevin Shattenkirk and Colby Cohen.  Both players were late cuts from the Avs preseason roster and are likely to get at least a cup of coffee in Denver sometime this season.  What these players will bring is offense.  Cohen has the potent slap shot which should help the Monsters power play.  Shattenkirk will bring a steadiness that the Monsters have lacked from some of their other defenders.

In addition to the BU pair, 2008 draft picks Cameron Gaunce and Joel Chouinard will be featured on the Monsters this season.  Chouinard is another smooth offensive defenseman, but Gaunce will add some toughness and grit to the Lake Erie back end.  Beyond the youngsters, the Avs also brought in free agent David Liffiton.  Liffiton played for the Syracuse Crunch (AHL) last season and produced 20 points in 72 games.  He is a former Avalanche draft pick in 2003.

It’s a young, albeit, exciting group that will need to improve the worst penalty kill from last season.  Add to the fact that they allowed 3.11 goals per game, this defensive group will need to gel quickly for the Monsters to have any success this season.  Head coach David Quinn and assistant coach Dan Laperriere may need to experiment early on to determine which six of these defenders can carry them throughout the season.

The Monsters will see many changes upfront as their top three scorers from last season, TJ Hensick, Darren Haydar, and Brian Willsie, are all playing elsewhere this year.  As it stands, the highest returning scorer will be Ryan Stoa who had 40 points in 54 games last season.  Most expected that Stoa would start the season Denver, especially after Peter Mueller suffered a concussion during the preseason.  Yet, Stoa didn’t take full advantage of the opportunity.  The Avs and Monsters both hope the demotion will be a much needed kick in the rear for the talented left-winger.

Kevin Porter, Philippe Dupuis, and Mark Olver, players expected to start the season in Cleveland, played their way onto the Avalanche roster.  Harrison Reed, Tom Fritsche, Justin Mercier, Matt Ford (AHL contract) and tough guy Patrick Bordeleau (AHL contract) are among the few hold overs from last season.  The Monsters were middle of the pack in terms of goals scored last year, but did finish with the 12th ranked power play.  Still, there are concerns as to where they will find their goals this year.

The Avs did bring in some solid veterans in Greg Mauldin, Julian Talbot, David Van Der Gulik, and Ben Walker.  The quartet combined for 80 goals and 181 points in the American Hockey League last season.  Newcomers such as recently signed Luke Walker, Zach Cohen and Mike Carman will need to make immediate contributions.  The Monsters will also need their defensemen to supply offense for the club to be successful.

It’s an intriguing group heading into the season, especially on the blue line, but there are concerns upfront.  John Grahame struggled last season, so Jason Bacashihua will need to be solid for the Monsters this year.  The team must improve defensively, especially on the penalty kill.  If they can get the scoring and tighten things up defensively, a playoff spot is attainable.

You can check out the Monsters first game of the season tonight on Fox Sports Ohio at 5:30 PM MST or tune in to AM 1220 WHKW.