Recently Edited, check the bottom of the page please.

Just a quick look at the Western Conference and how many man-games they have lost to injury.  Take a wild guess where the Avs rank.

I couldn't find any websites that specifically track this stat, so I had to improvise a bit.  I went through NHL.com and checked the roster of each club for players on the IR.  Please note that these lists are therefor incomplete, since they do not take into account players that miss games with injuries but are not placed on the IR.  Examples of this are Avalanche players Jones and Wilson, neither of whom were placed on the IR, but are still out injured.

I did include these stats for the Avs because, well, I knew them.  I could have figured it out for all the other team by manually checking the player statistics for every player on every team, but... yeah, not so much.  This should give us a rough idea of where we stand. 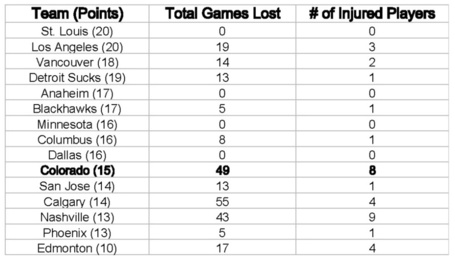 The only club that surpasses the Avs in Man-Games is Calgary.  I double checked the players that were out on that club, and made some notes about them:

- Kotalik:  14 games missed.  10th year NHL player, averaging about half a point per game.  Good player, but his production dropped off significantly over the last three years.  This is his fourth club over as many years.

So thats it.  The Avs have lost our starting goaltender, our nastiest shut-down Dman, our solid 2nd line LWer, our 'enforcer', and a string of lesser role players.  Tonight, we lost our 1st line LWer, and an up-and-coming 4th liner, one for many weeks and the other likely for the season.  We currently have 15 points and sit 10th in the west, but a couple points could jump us pretty far up in the standings.

Any thoughts on who we call up?  Mauldin had a good camp, Olver did fairly well for his short stay with the big club, and it might be ripe to see what Mercier can bring.  Talbot is also cranking out the points, so he might be a getting a call.

Its seems as tho I totally botched the Nashville numbers and glossed over their entire injury list.  Chart is updated to reflect the new numbers. They are just as beat up as we are, and probably worse off if you take Koci off of the list.

Seeing as how I did that so poorly, I will double check all the stats when I get the chance (probably late tonight), but if you see something that I did especially badly/wrong I will be glad to update the list and get it right.  Now its become a quest to get this list as right as I can to see where we stack up.

Also, the list of players for each team that are hurt will be added and subsequently updated as I find new info: